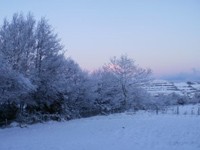 DONEGAL COUNTY COUNCIL has defended its operations after complaints that many of the county’s secondary roads are still impassable.

More than 80 schools are closed as record snow falls and ice continue to bring most of the county to a standstill.

A full list of the affected schools is listed in our donegaldaily.com news section, with some already deciding to close for several days.

Gardai have warned that only essential journeys should be made today.

Heavy snowfalls over the weekend across the county has left many roads impassable, with up to 18 centimetres of snow accummulated in some places.

The snow was accompanied in many areas by freezing sub-zero temperatures of -6.7C and freezing fog. As more snow fell overnight across, AA Roadwatch warned drivers to stay off the roads if possible today and to use public transport where available.

Some major roads have been gritted but there are treacherous conditions this morning throughout Inishowen, and on all minor roads around Ballyshannon, Donegal Town, Newtowncunningham, Laghey, Letterkenny, Ramelton, Kilmacrennan, Gaoth Dobhair, Glenties, St Johnston, Lifford, Burt and Stranorlar.

On Saturday night the Donegal Mountain Rescue team had to help Gardai clear 50 stranded vehicles on the Barnesmore Gap.

If you are lucky enough to live on one of the 24 routes being gritted by Donegal County Council today, you may be able to drive today. If not, you’re stuck!

Ice, snow and thick freezing fog in some areas is making driving extremely hazardous however.

But with more snow and freezing temperatures being forecast for the rest of the week, schools could be closed for several days. A small number have already decided to close until Wednesday at the earliest.

The weather also hit the planned John Kennedy testimonial between Celtic and Finn Harps in Ballybofey after the Glasgow team’s flight was cancelled.

Bus services are being curtailed and a number of business and health services have also been affected by the white-out.

Met Eireann says the snow and ice conditions could continue across the North West for another week.

FULL LIST OF SCHOOL CLOSURES ON THIS NEWS SECTION