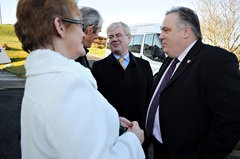 The Labour Party has dismissed claims that leader Eamon Gilmore called Gardai to apologise after Frank McBrearty rowed with Gardai at a polling station.
While candidates are allowed to visit polling stations on the day of an election, they are strictly forbidden to canvass voters.
It has now emerged that an agent from another party called Gardai last Thursday claiming the Raphoe politician was canvassing members of the public at a polling station in Stranorlar.
When the Gardai arrived it is understood Mr.McBrearty got into a heated argument with Gardai before he left the polling station.
However a spokesman for the Labour Party has described the incident as “a storm in a teacup.”
The spokesman went on to say that they had been contacted by several reporters about the incident.
However claims that party leader Eamon Gilmore had been forced to contact the Garda Commissioner’s office and apologise have been dismissed.
“That certainly was not the case. Nothing of the kind happened. There was a minor incident but it was a storm in a teacup,” he said.
Despite being tipped as a dark horse in the race, Mr.McBrearty could only manage to come in fifth place behind Independent Thomas Pringle.
Earlier this week veteran Labour politician Seamus Rodgers from Annagry suggested the party had picked the wrong candidate.