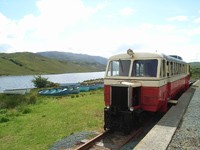 BLINK and you will miss the signpost for the Fintown Railway.

In fact, blink and you will probably miss the entire village of Fintown.

Nestled between Letterkenny and Glenties, it could be one of a thousand villages anywhere in Ireland.

A wide main street boasting the staple diet of village life in the shape of a shop, petrol pumps, a school and a couple of pubs.

Fintown is nothing more and nothing less.

But the people of here have one added attraction which the vast majority of villages cannot claim – their own railway.

Since 1995 a dedicated group of locals in the Gaeltacht village have come together to realise a dream.

And today the Fintown Railway stands shoulder to shoulder beside any of Ireland’s other tourist attractions.

It may not have an interpretive centre or a fancy café serving paninis and pastries, but the Fintown Railway does exactly what is says on the tin. 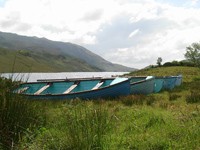 It is impossible to describe the sheer beauty taken in by a ride on the Fintown Railway.

It almost feels like your carriage is sliding across Lough Finn as the steep shoulders of the far shore rise above you like the blackest of thunder clouds on a February day.

It is no wonder that playwright Brian Friel described a ride on the Fintown Railway as “a unique journey along the shores of a lake as grand as any in Switzerland or Minnesota.”

During the late 1800s the County Donegal Railways had a network of narrow gauges which stretched out over 200 miles serving even the remotest parts of the county.

The arrival of improved roadways along with road haulage saw the inevitable disappearance of rail transport.

On December 31st, 1959, the County Donegal Railway saw its last train roll down the tracks.

By right the Fintown railway should be a distant memory, its iron tracks long since given way to grass and the scourge of rust.

Thanks to a dedicated committee of volunteers and a couple of workers from a FAS scheme, the railway has survived and flourished in recent years.

If anything the one thing that is quite literally halting the popularity of the train in its tracks is its lack of ambition.

Granted those who run the train do so on a voluntary basis and most likely put some of their own money into it as well.

Although the centre piece of the Fintown Railway is a delight, the surroundings of the experience offer even more potential.

A shed, which most probably was once housed trains brought in for repair, could so easily now house a museum detailing the history and memorabilia of the Donegal Railways of bygone days.

And the playground could so easily be upgraded to cater for children of all ages as they wait for the next train to pull into the station.

Having recently returned from the railway’s Ghost Train Experience at Halloween, I know first hand (as do three still shaken children!), of the lengths the volunteers are going to keep the railway’s wheels oiled.

The upcoming Santa Train experience also has the potential to cater for hundreds if not thousands of children across Donegal and further afield.

And come the long school-free days of July and August, parents have no excuse not to visit a genuine attraction that offers good fun and a once-off experience.

The Fintown Railway is still on track after 15 years in operation and there’s certainly no signs of the wheels coming off any time soon.

Visit www.antraen.com for all the details you need to discover one of Donegal’s hidden attractions.