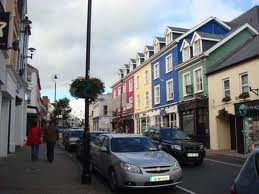 WORK ON the €800,000 facelift to Letterkenny’s Main Street has been slowed down because of the horrific weather conditions.

The refurbishment, which includes the controversial vertical arches, was supposed to be completed yesterday or today.

The companies behind the work have been working around the clock on the project, including evening work, to have it completed by the beginning of December.

Many business-owners on the town’s Main Street had expressed their concerns that any delay would impact on the traditional Christmas shopping spree.

However Town Engineer John McCarron had assured traders that a penalty clause had been pencilled into the contractor’s agreement in a bid to keep a tight deadline on the project.

But now it appears that Mother Nature has dealt traders the cruellest of blows.

A spokesman for Letterkenny Town Council said it is hoped the upgrade work will finally be completed in the coming days.

As well as extensive paving works and the widening of footpaths, a new tarred surface has been put on the main street.

Meanwhile the local Chamber of Commerce has confirmed the switching on of the Christmas lights will take place tomorrow (WED) evening at 6pm by Town Mayor Tadhg Culbert.

As well as singing, a special appearance will be made by Santa who will officially announce that Letterkenny is now open for Christmas business!