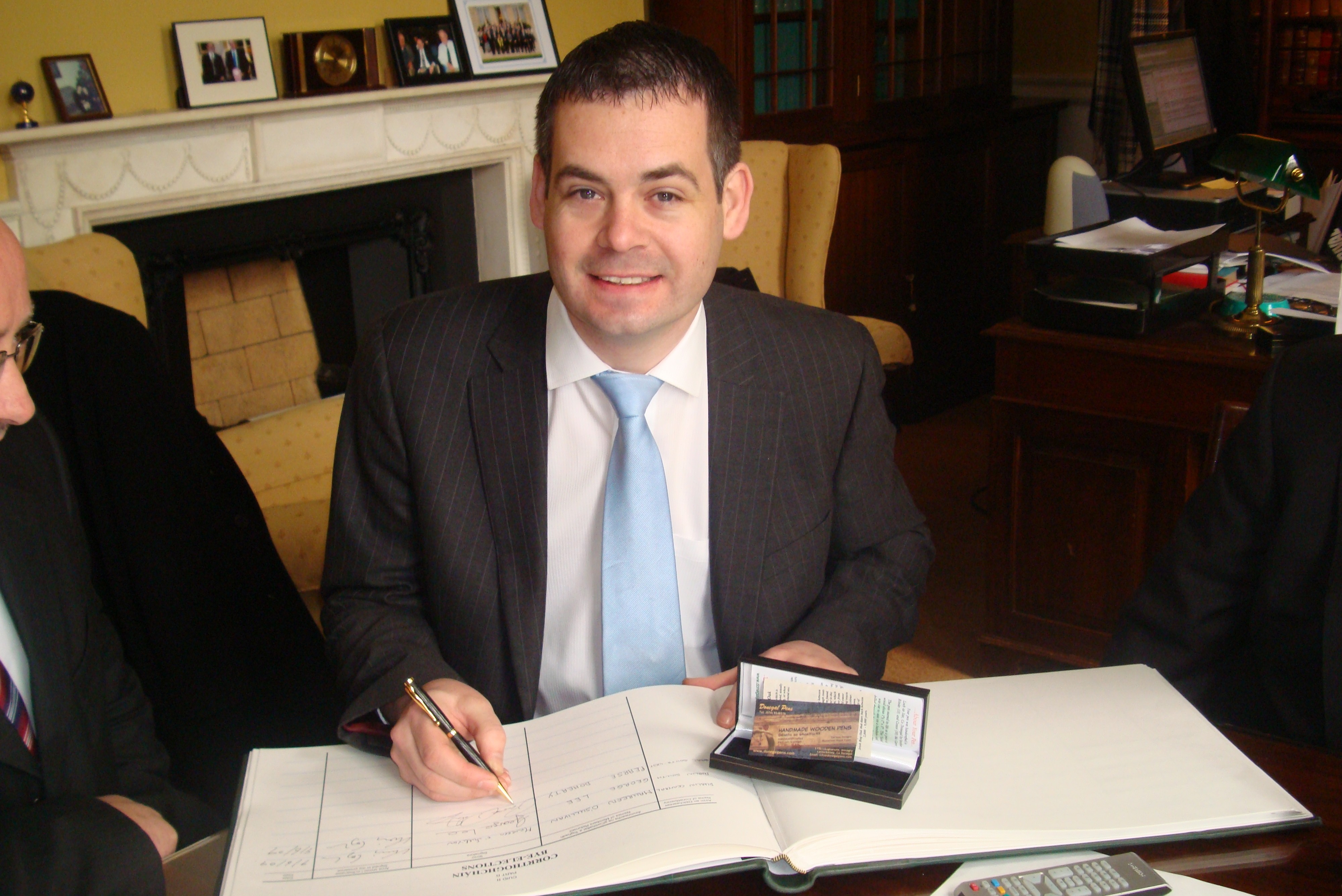 DONEGAL’S newest TD took his seat at Dail Eireann last night the same way he swept to victory in Donegal South West – with a bang!

The Gaoth Dobhair man declared he had a mandate from the people of the county to seek an end to corruption and help make a fresh start for the people of Ireland.

Using a pen made by the young McGarvey brothers from Donegal Pens in Loughanure to sign in at Leinster House, Doherty received a huge round of applause.

But the Sinn Fein man wasted no time in getting stuck into the Government and declaring the party was over for the ‘mercs and perks.’

Surrounded by friends and family including devoted wife Roisin, Doherty said it was a huge honour for him to represent Donegal in Dail Eireann.

And he called for an immediate reduction of 40% in Minister’s salaries and another cut of 20% on all TD’s wagepackets.

“Firstly I wish to extend my sincere thanks to the people of Donegal  South West for putting their faith in me to represent them in the Dáil. It is a huge honour.

“I want to reiterate to those voters that I fully intend to honour the  manifesto on which I fought the by-election campaign.

“I am very proud to be joining my fellow Sinn Féin TDs today in what is the only real political opposition in Leinster House.

“I have been given a very clear mandate to oppose the savage anti-people budget that this Government is planning, to oppose cuts to public services and social welfare and to oppose IMF interference in Ireland.

“The platform on which I stood was one which advocated a better, fairer way for Ireland.

“Sinn Féin is the only party putting forward a constructive alternative in the Dáil.

“We have advocated a recovery programme that involves stimulating the economy, creating jobs, protecting the most vulnerable in society and ensuring that those who can afford to pay their fair share do so.

“It is time to change the direction of Irish politics. It is time to end cronyism and corruption and to reform our political institutions.

“Sinn Féin has proposed that cuts can indeed be made but that the should be made at the top and not at the bottom.

“I met an incredible number of people during the by-election campaign. Many were in real hardship, struggling to make ends meet. They are living in real fear of this government’s cuts agenda, an agenda it must be said that is broadly shared by Fine Gael and Labour.

“The problems faced by these people are still there today. Dealing with those problems and those fears, defending the livelihoods of ordinary working families and creating a viable future for our young people to live and work in their own country – that is the challenge which faces us now and that will be my focus in the Dáil,” he said.