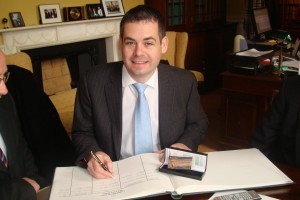 SINN FEIN’S Pearse Doherty said he was ‘honoured’ today after being appointed the party’s Fianance Spokesman in the Dail.

The newly-elected TD for Donegal South West made the comment as a national opinion poll out today, which was taken after Pearse Doherty’s election victory in Donegal South West, has shown a jump in support for Sinn Fein – with his party sitting in third place AHEAD of Fianna Fail.

The Red C Poll for today’s edition of the Irish Sun shows Fianna Fáil on 13%, a drop of 3% on the last poll almost two weeks ago.

The Greens remain unchanged, while support for Sinn Féin has jumped by five points to 16%, putting them in third place.

Independents and others have also seen a rise in support of three points.