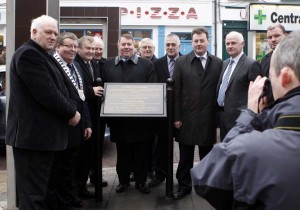 THE OFFICIAL opening of the newly refurbished Letterkenny Main Street took place yesterday with the promise that the Cathedral Town is very much open for business.

It might have been two weeks behind schedule due to the snow but the €1million facelift has been given the thumbs-up from business owners and the public alike.

An array of movers and shakers from the Cathedral Town turned up to see Mayor Tadhg Culbert officially unveil the plaque to mark the opening.

Colr Culbert said it was fitting that the Main Street had undergone such a facelift and would stand proudly alongside any Main Street in the country when the town celebrates its 400th anniversary next year.

“I must pay tribute to everyone involved from the contractors to the Chamber of Commerce, the town council and to the council employees.

“I know people had reservations about finishing on time and about disruption but everyone who had something to say was listened to and a way was found around every obstacle.

“It is fitting that we will have a marvellous Main Street when thousands of people come to visit here for the 400th anniversary celebrations next year,” he said.

County Mayor Cora Harvey said it was fitting that Letterkenny now had a Main Street that would rival any in the country.

“I wish all the people of Letterkenny many years of happy shopping and they should be very proud of their Main Street,” she said.

The upgrades work on the street, the majority of which was carried out by contractor Dean Public Works, includes new paving, underground lighting, archways, benches, boxed trees and ornate railings.

CEO of the Chamber of Commerce, Paul Byrne, on his last official function, said he was proud to be involved with the upgrade of the Main Street which he said was a huge step forward for the town.

“Coming as it does at a time when it is hard to get any money, this upgrade is even more of an achievement.

Among the many who attended the opening ceremony were County Manager Seamus Neely, members of the clergy, local town and county councillors, many business owners and townspeople.