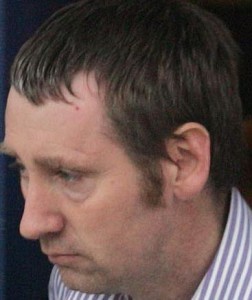 IT WAS a story which shocked the county when donegaldaily.com was first to expose the cruel Donegal man who castrated his neighbour’s little terrier because it was annoying his own purebred pedigree pooch.

Now the story has shocked the country – and the world! And it is being reported by news and radio stations around the world including the USA, Australia, Canada and New Zealand.

Crazed Eddie Flood, 43, used a lambing ring to cut the testicles of little Rusty after becoming worried that the little terrier would mate with his border collie.

Father-of-four Flood, of Carnasaull, Termon, claimed the dog was allowed to roam freely and that he had been forced to remove it from his house more than 20 times.

After becoming sick of the dog, he put a rubber lambing ring on it – the kind which is normally used to cut the tails off lambs.

Flood used a set of pliers to put on the ring and after a few days the dog was unwell and lethargic.

It was only then that his owner was noticed the dog had lost its testicles.

The dog’s owner, Frank McGettigan of Meenreagh, Termon, told Letterkenny District Court, that he was distraught when he discovered what had happened to his three year old pet dog. 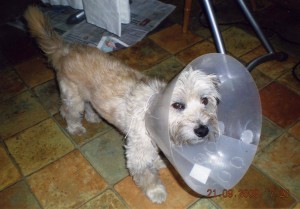 He didn’t know who had done such a thing and mentioned it to Flood but he denied having anything to do with the attack.

Inspector for the ISPCA, Kevin McGinley, approached Flood on September 11th of 2009 and put it to him that he had placed the ring on the dog.

Flood’s solicitor Ms Sinead Bradley told the court that the lambing ring was a common procedure used on lambs which did cause some discomfort.

She said her client now admitted the offence but said his three dogs had been pestered by the little terrier.

She said Flood was an animal-lover himself and had only castrated Rusty after he had “lost it.”

Flood had a pedigree border collie which he was afraid for as the terrier dog was trying to mate with it.

He claimed he had been forced to lock the dogs into a shed as the terrier had been constantly calling around to the house and trying to interfere with his dogs.

He also claimed he had to return the terrier to its owner on numerous occasions.

Flood also claimed his three children had become frightened of the dog – a claim which the dog’s owner completely denied.

Ms Bradley said all the neighbours in the area who owned female dogs were aware that Mr.McGettigan’s dog was allowed to roam freely and was considered a nuisance.

But even after he was castrated it was revealed the dog returned to Flood’s home and tried to mate with the border collie again.

Mr.McGettigan told the court that he had been forced to give away the dog after the incident after spending more than €200 on vet fees for the injured dog.

He said he found the dog a new home because he was afraid for its safety.

Ms Bradley said she had been told by neighbours with female dogs that Rusty had been a pest and that no dog was safe from the attentions of the terrier.

He fined the unemployed father of four a total of €730 – €230 for the vet bills and a further €500 compensation to be paid to Mr McGettigan for the loss of his dog.

He also adjourned the case until March 14th to see if the compensation has been paid to the injured party.

Speaking after the case, Inspector Kevin McGinley of the ISPCA said he was satisfied at the outcome of the case.

He also revealed that this is the THIRD such case in which a lambing ring has been used to castrate a dog because it had tried to mate with another dog.

“We are very pleased at the outcome of the case. Hopefully this will show people that they cannot take the law into their own hands.

“We would ask people whose dogs are being worried by other dogs to contact us and we will investigate each case,” he said.

Rusty’s plight, it seems, has now taken on international significance with news and radio stations around the world reporting our donegaldaily.com exclusive.