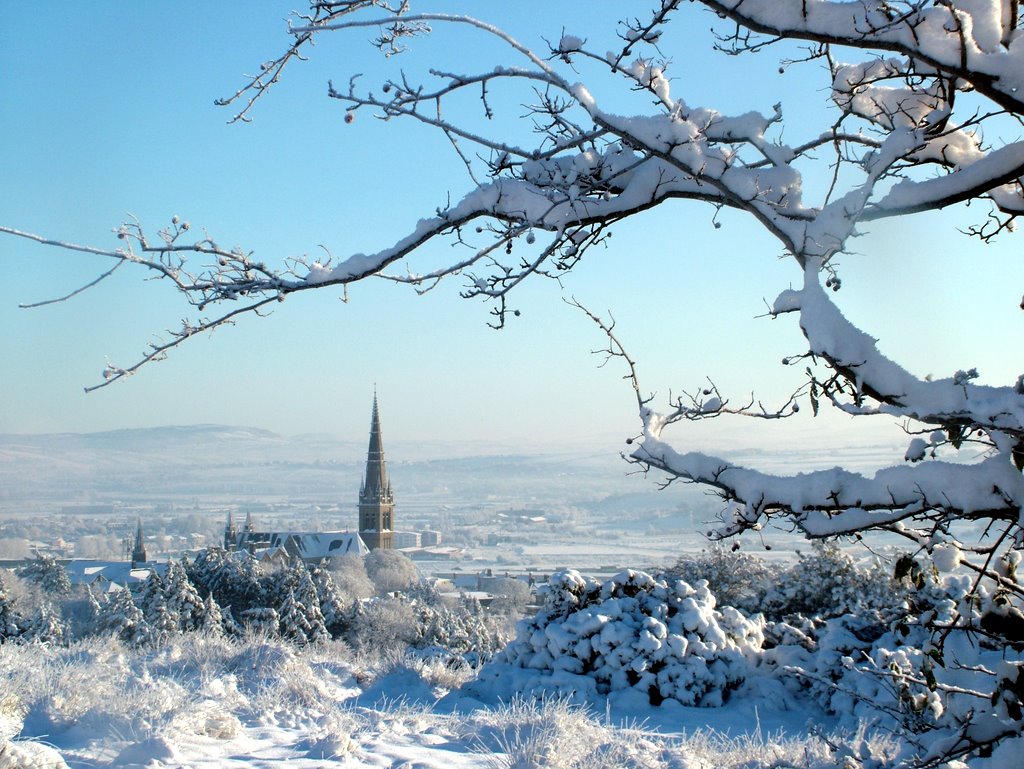 BIG CHILL GETS WORSE AS TEMPERATURES DROP TO -15C

LATEST: DONEGAL IS FACING more freezing conditions tonight with -15C expected and 5CMs of snow in northern parts of the county.

Roads across the county are said to be hazardous once again, particularly on secondary roads.

Although council gritters were once again out in force tonight, the lack of salt on most roads is evident as the ice and snow fails to melt.

Many people appeared to have listened to the advice of Gardai and the council with hundreds of Christmas parties and events being cancelled this weekend.

And the bad news is that fresh falls of snow are due in parts of Donegal tonight.

Although they are not believed to be as bad as the amounts which covered the county on Friday evening, temperatures have stayed below freezing throughout the day.

Shafted by the central Government and the NRA, Donegal was once again left without adequate salt supplies – and businesses suffered as shoppers stayed at home on what should have been the busiest shopping day of the year.

Instead what is known as ‘Black Saturday’ because of crowds of shoppers became ‘White Saturday’ with thousands of people staying away.

Some brave shoppers did try to get out on Sunday.

Council senior Engineer Vincent Lynn said his staff have been out since 1am using snow ploughs and gritters to make roads better.

“The main roads are passable with care and that’s only because staff have been out all night. We are doing the best we can,” he said.

Some roads are closed including the Termon to Dunlewey road behind Mount Errigal. There was also a huge tailback at Illistrin on the Letterkenny-bound lane for a time after a number of cars skidded and blocked the route.

The Barnesmore Gap is passable with extreme care. Travellers should check with their airlines before travelling as many British airports are closed.

The postal service was cancelled in many towns with An Post workers sorting letters and parcels in the hope of getting the backlog cleared over the next 72 hours.

The HSE has also warned that many home visits will be cancelled in the coming days while community nurses will be transported to rural homes by the maountain rescue services.

However many events are cancelled including charity Christmas parties and shows. Again Gardai say people should check all events before travelling.

Towns across the county which would have normally been thriving with Christmas revellers are instead reporting much lower trade.

In Donegal Town there were very few people in the pubs – and it was the same story in Ballyshannon, Ardara and Gaoth Dobhair.

And in Letterkenny the extensive snow put all but a handful of taxis off the road, with only a few hardy revellers braving the elements to get to the pubs and clubs this weekend.

Tonight businesses across the county will be counting the cost of the double blow of heavy snow -and the lack of salt on the roads.

Already hit by Government cuts and the recession, retailers need a good run up to Christmas to survive the months ahead.

Chief Executive of Letterkenny Chamber Toni Forrester is furious with the Government -and the lack of salt and grit supplied to the councils here by the National Roads Authority.

Gardai are urging people not to travel – and if they do, to travel with extreme caution. Bus Eireann is running some services with time delays.

A thaw is expected towards the end of the week – just as new salt supplies arrive!

SEE OUR PICTURE GALLERIES ON OUR NEWS AND FEATURE POSTS

BIG CHILL GETS WORSE AS TEMPERATURES DROP TO -15C was last modified: December 19th, 2010 by admin