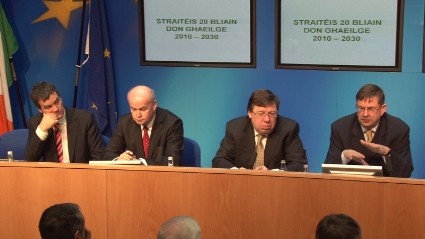 IRISH SPEAKERS in Donegal are delighted today – after all-party support for a new strategy for the language was finally unveiled.

Taoiseach Brian Cowen has launched a 20 year plan for the Irish language, vowing to treble the number of speakers by 2030.

At the launch of the 20-Year Strategy for the Irish Language 2010 – 2030 yesterday, the Taoiseach said: “For the first time since the foundation of the State, we have a comprehensive long-term plan for the Irish language. This plan aims to increase the number of people who speak Irish on a daily basis from 83,000 to 250,000 over the next 20 years.

“Achieving this goal will not be easy, but I am confident that we will succeed.”

The Minister for Community, Equality and Gaeltacht Affairs, Pat Carey TD, said “This new and comprehensive national plan will allow us to take a new approach and ensure that the State, language organisations and the public are working together to promote the Irish language.”

The Taoiseach referred to the renaissance which the Irish language has enjoyed in recent years while also acknowledging that the language remains in a vulnerable position as the primary community language of the Gaeltacht.

The Taoiseach said: “If we are to protect the status of the language in the Gaeltacht and increase the number of speakers nationally, we now need a more modern, strategic and collaborative approach to language promotion and maintenance.

“We also need a more enhanced engagement with the public than we may have had in the past. The Government’s new 20-Year Strategy will provide us with the framework to achieve that. It will also allow us to focus resources towards the area of language planning.”

The Minister for Community, Equality and Gaeltacht Affairs, Pat Carey TD, highlighted the level of cross-party support in the Oireachtas that the Strategy received during its preparation.

The Minister referred to the fact that over 1.6 million people claim some competence in Irish and said “This Strategy seeks to address the gap between competence in and usage of the language with a view to ensuring that the language survives and thrives.”

The status of Gaeltacht regions will be upgraded in a bid to promote and protect our language and culture, according to Donegal South West Fianna Fáil Senator Brian Ó’Domhnaill.
Details have been unveiled of a new 20-year strategy for the Irish language, which aims to increase the daily speakers of Irish across the country from 83,000 to 250,000 by 2030. There is also a target to increase daily speakers in Gaeltacht areas by 25% over the same period.

Senator Ó’Domhnaill – who is on the board of Údarás na Gaeltachta – has described the strategy as evidence of the Government’s commitment to supporting what is a vital part of our culture and identity.

“This is an ambitious but achievable plan, which seeks to preserve our beautiful national language for future generations. Through intensive work with academics, researchers and stakeholders, the Government has come up with a strategy to promote Irish across schools, homes, communities and the workplace,” explained Senator Ó’Domhnaill.

“The plan recognises the pivotal role played by Gaeltacht areas in preserving our heritage and it promotes the growth of these regions throughout the country. Under new criteria, each  Gaeltacht community must have an extensive language plan and will be given two years to meet targets in order to keep its status. New areas can be granted Gaeltacht status if they meet the criteria.

“I am delighted that Údarás na Gaeltachta will be given increased powers under this strategy, as this is something I have consistently fought for. The organisation will be renamed Údarás na Gaeilge agus na Gaeltachta and it will have responsibility for all Irish language matters throughout the State, as well as keeping its enterprise functions.

“There will also be increased promotion of Irish in schools. It’s important that our teachers display a love for the language and have the materials and syllabus to pass this on to our children. Under the strategy, teachers will be required to have a stronger grasp of Irish and 20% of places on teaching courses will be kept for students who were educated through Irish.

“I have consistently fought for a strong strategy to increase the use of Irish right across the country and protect the culture and economy of the Gaeltacht. I am convinced that this is plan will achieve that goal and I welcome the Government’s commitment to this,” concluded Senator Ó’Domhnaill.