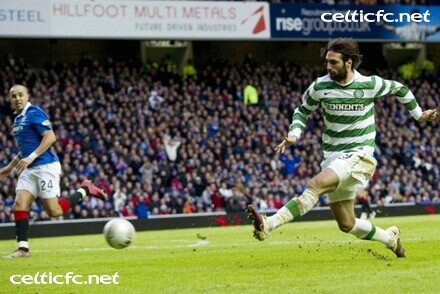 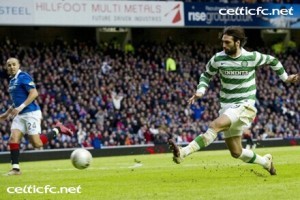 IT WAS A hoopy new year for Celtic fans in Donegal today as Georgios Samaras hit the back of the net twice to give the Hoops a more than deserved victory over rivals Rangers – taking the green side of Glasgow four points clear in the SPL.

Rangers were denied a fifth-minute lead when Emilio Izaguirre deflected a Lee McCulloch header off the crossbar.

But Celtic took control after the break and Samaras rounded goalkeeper Allan McGregor to score after 62 minutes.

The second came eight minutes later when Samaras was pulled down by Madjid Bougherra and scored with the penalty.

Reigning champions Rangers responded but could not prevent Celtic claiming their first victory on their Old Firm rivals’ patch since December 2008.

And it was revenge for a side beaten 3-1 the last time they met their Glasgow neighbours, at Celtic Park in October.

An emotional day at Ibrox was ensured by an impeccably observed minute’s silence to mark the 40th anniversary of the Ibrox disaster that led to the death of 66 people at the Old Firm derby on 2 January 1971.

Led out by famous captains John Greig and Billy McNeill, the respective sides had a chance to become modern legends.

And it was Greek god Samaras who was the Celtic hero as the Hoops completely dominated the second half.

IT’S A HOOPY NEW YEAR FOR CELTS FANS IN DONEGAL AS SAMARAS THRASHES RANGERS AT IBROX was last modified: January 2nd, 2011 by admin