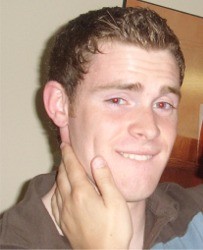 GARDAI INSIST: WE ARE STILL HUNTING FOR JOE’S HIT-AND-RUN KILLER

DETECTIVES investigating the death of a 22-year-old Carndonagh man killed in a hit-and-run accident a year ago say they will continue to probe the incident.

Joseph McLaughlin was knocked down and killed on around 4.40am on  January 3 last year as he walked near his Tiernaleague home after a night out in Carn.

The popular local lad was home in Donegal on holidays from NUI Galway where he was a final year mechanical engineering student.

His body was discovered by a passing taxi driver.

Renewing his appeal for information he said: “We would ask any person or persons who might have information relevant to the death of Joe McLaughlin to come forward no matter how trivial or insignificant they may view that piece of information.”

Joe was the first pedestrian killed on our roads in 2010.

His parents, Willie Joe, a farmer, and Mary, a retired nurse, and three sisters are still devastated by his death.

At the time Anthony Burke, the chairman of Carndonagh GAA club said: “He was just a lovely, lovely young man. I would have been proud to call him my own.

“He had his whole life ahead of him. He had even set up a job with an uncle in America for the summer holidays. And he called into visit his 92-year-old grandmother in Sligo on his way home for the Christmas holidays. That was the kind of young lad he was.”

Anyone with information on Joe’s death should call Buncrana Garda station on 074 9320540.