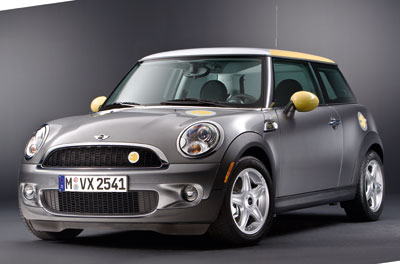 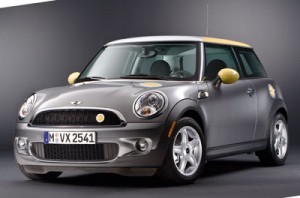 DONEGALDAILY CAR REVIEW BY IAN LYNAS: SLOW, boring and uninteresting are words that you might use to describe an electric powered vehicle but this is not the case with the MINI E.

I got behind the wheel of one from the MINI plant at Cowley, England and was I in for a surprise!

The MINI E is a zero emissions vehicle that combines striking design with high performance and a state-of-the-art electric drive train.

This very special MINI has been tested on UK roads by a mixture of private, corporate and public sector drivers, all of whom have given valuable feedback to the project consortium.

These findings will ultimately be used in the engineering and infrastructure support of mass-produced electric vehicles and establish the social and economic issues and aspects of running an electric car.

I am assured that it can travel around 100-120 miles on a single charge, depending on driving style and conditions, and of course it has the all the characteristic performance for which the MINI is famous.

The MINI can reach 0-62mph in just 8.5 seconds and it has an electronically-limited top speed of 95mph.

Powering the MINI E, a front-mounted 150-kilowatt electric motor,which generates the equivalent of 201bhp.  The motor’s energy supply comes from a high-performance rechargeable lithium-ion battery, which is installed in the rear of the car in place of the back seats.

This is strictly a two seater and the battery unit, which uses the same technology already widely used in mobile phones and laptop combines ample storage capacity with remarkable power output.

It can be recharged from empty in around four and a half hours.

The MINI E’s drivetrain features regenerative braking, which claws back the energy lost when the driver releases the accelerator to extend the range by up to 20 percent. I must point out that once you take your foot off the accelerator pedal the MINI E slows dramatically, in other words there is braking.

With the same suspension design as the standard MINI, slightly modified to reflect the electric car’s different weight distribution, it remains great fun to drive.

This very special MINI made its world premiere at the Los Angeles Auto Show in November 2008 and was initially available under lease to selected private and corporate customers as part of a trial project in the US states of California, New York and New Jersey.

The overwhelmingly positive feedback from these first trials led to similar large-scale tests being introduced in Germany (early 2009) and now over in the UK, the three largest markets for MINI. It’s arrival in Ireland isn’t far away.

If someone from the Rathmullan area was travelling to work each day in Letterkenny, the cost of charging would be somewhere in the region of 60cent. Looking at a month of driving, including weekends, the MINI E would be about 90% cheaper than a normal car which delivers 35mpg.

When can you buy a MINI E?

The million dollar question, the test cars are all prototypes from a one-off production run of 600 cars for all the tests around the world and  MINI will need the cars back after the test for a full technical evaluation of their performance. So there is no date available as to when the MINI E will be available at your local dealer. Word amidst the motoring world is that later this year we shall see an electric BMW.

A race version of the MINI E has been built and it made its public debut at the Nurburgring in May when it covered several laps of the challenging 20.8 km Nordschleife driven by Thomas Jager, 2006 MINI Challenge Champion.

Jaeger managed a lap in 9 minutes 51.4 seconds and achieved a top speed of 117mph on the sinuous Eifel tarmac.

COST TO CHARGE: 60c per day