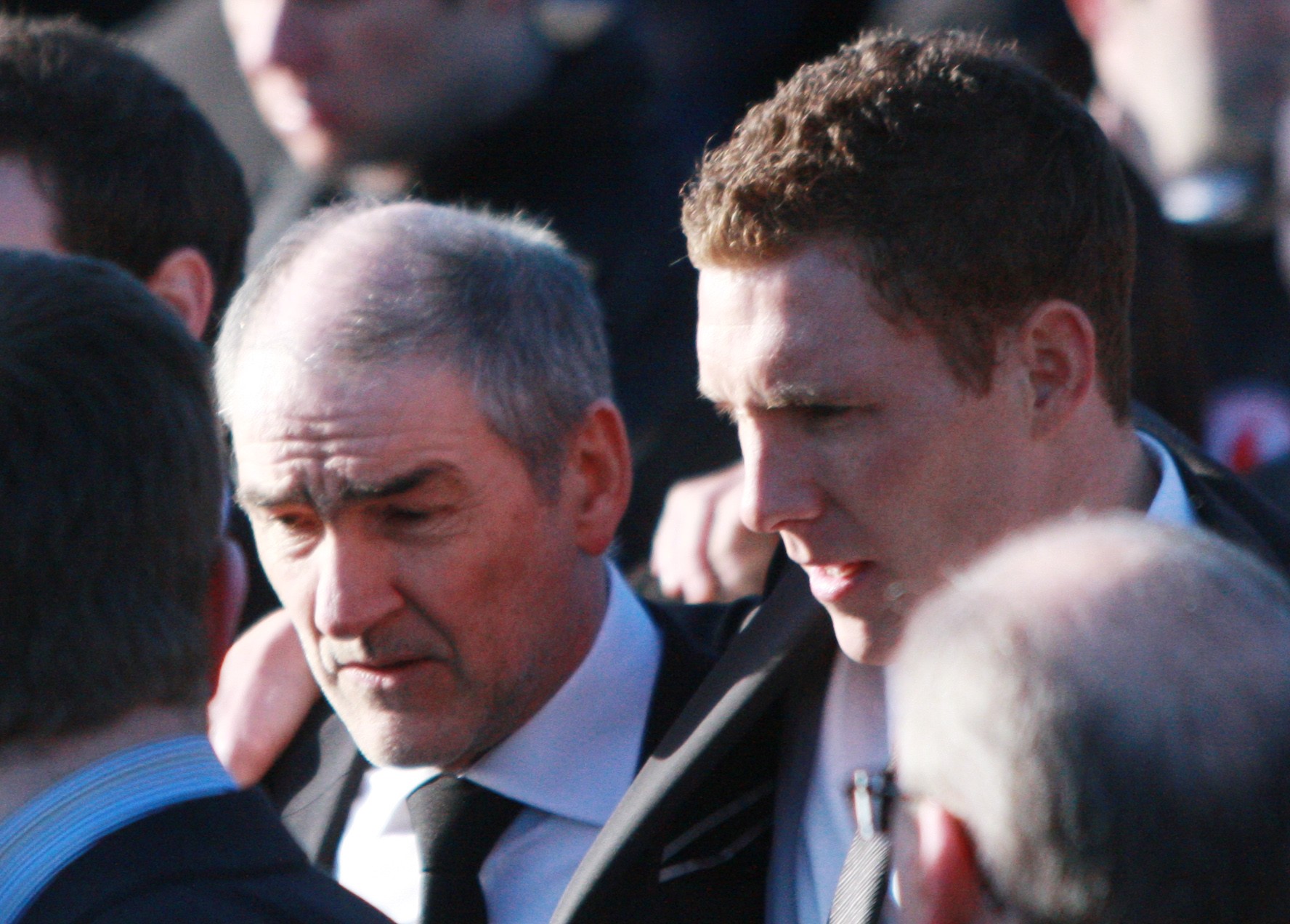 THOUSANDS OF people lined the country roads outside Ballygawley today to say a sad and final farewell to tragic Michaela Harte.

A week after she was brutally killed while on honeymoon in Mauritius, weeping mourners lined the road to St.Malachy’s Church outside Ballygawley in Tyrone to pay their respects to the young teacher.

Hundreds of mourners walked behind the coffin of Michaela, 29, which left her hillside home on the Glencull Road just before noon.

The normally busy A5 road fell silent as thousands of people walked the route to St.Malachy’s Church just a mile away.

Dozens of marshalls in luminous jackets brought traffic to a stop to allow for the cortege to make its way to the church where Michaela married her husband John just two weeks ago.

The black hearse was flanked on either side by members of both the Tyrone Senior Football team and Michaela’s dad Mickey’s own local club Aireagal Chiarain.Her devastated dad, husband John McAreavey and brothers Mark, Michael and Matthew walked behind the hearse as her heartbroken mum Marian sat in a mourning car behind.

Dad Mickey, husband John and her brothers then bore the burden of carrying the coffin for more than two hundred yards before it was put inside the hearse outside St.Malachy’s Primary School where Michaela first attended school.

Heartbroken husband John then put his arm around his new father-in-law as they gave eachother the strength to carry on to the church where their daughter and wife was to be buried.

At St.Malachy’s Church, which is located up a small country side-road, a guard of honour was provided by Tullylish GAA club (John’s local club) and pupils from Michaela’s form class at St.Patrick’s Academy in Dungannon.

Two large screens were placed outside the church grounds to cater for the thousands of mourners who could not squeeze inside the modest church.

In his homily to the beautiful Tyrone woman, her husband’s uncle Bishop of Dromore John McAreavey said it seemed like the whole world had been touched by Michaela’s death.

“This day last week, in the early afternoon, news began to filter through that Michaela was dead. In our initial shock and disbelief, our thoughts went to her husband John, Michaela’s family, and the McAreavey. As the week went on, this circle widened and widened and it seems as though the world has been touched by Michaela’s death,” he said.

Bishop McAreavey said he wanted people to remember St.Malachy’s Church in Ballymacilroy as a beautiful place where Michaela’s life reached its climax on her wedding day.

“I stress this, because John and all who love Michaela will want to hold the memory of that very special day rather than the day or the circumstances of her death,” he said.

He added that the Harte family and all who knew Michaela needed the strength to face the ‘evil’ which had take her from them.

“Today we somehow need to face the darkness of these days. An evil act ended Michaela’s young life last Monday; it robbed John of his beautiful wife; it deprived the Harte family of their precious daughter and sister; it deprived the McAreavey family of their daughter-in-law they looked forward to having; it shattered hopes and dreams for the future.

“Nothing in John’s young life could have prepared him for the ordeal of the past week. Even those of us who are older and who had some experience of tragedy have been shaken to the core by what has happened.

“We are still in a state of shock. At this dark time we turn to our faith and to our relationship with God for resources that might bring us some light and comfort,” he said.

Bishop McAreavey said in recent days people have talked about the special love they enjoyed for one another and said their love was bound up with eachother.

“They had pledged their love to one and other. Michaela took John’s name and was delighted and proud to do so,” he said.

He said underlying Michaela’s life was an even deeper love – a love of God.

“Michaela’s rosary and her Pioneer pin that will be brought up capture elements of a faith that was deep, simple and totally real. This is a part of Michaela’s life that we cherish and it is a source of comfort to us now,” he said.

“There are times, like now, when we struggle to see the hand of God in the things that happen,” he said.

Among the hymns during the mass was Christ Be Beside Me, Mo Ghrasa A Dhia, Peace I Leave, I am The Bread of Life, Southwinds (instrumental performed by Cathal, Marisa and Cathy Harte, first cousins of Michaela) as well as Caledonia which was sung by Mark Black and which was a favourite of tragic Michaela’s.

Many symbols of Michaela’s short life were brought to the altar at the start of the moving mass.

These included family pictures, a set of Rosary beads, the fainne – an Irish emblem worn by people who speak the Irish language, a pioneer pin, a rose which was a symbol of Michaela’s participation in the Rose of Tralee in 2004.

Tea and biscuits were also brought to the altar which Rev Gerard McAleer said needed no explanation for people who knew Michaela.

The First Reading was given by Tyrone GAA legend and close family friend, Brian Dooher.

The Second Reading was given by Johnnie McDermot, the chairman of Tullylish GAA club in Co Down – husband John’s local club.

Among those who read the Prayers of the Faithful was John Devine, former Tyrone All Ireland winning goalkeeper, Aileen O’Hare – a teacher at St.Patrick’s Academy in Dungannon and a close friend of Michaela, Susan Cullinan, Michaela’s Irish teacher in Loreto Convent Grammar School and Francie Downeyof Newry, a groomsman at the couple’s wedding and friend of John’s from University.

Among the chief mourners at the funeral were Michaela’s husband John, her parents Mickey and Marian, her brothers Mark and his wife Sinead, Michael and his wife Josephine and Matthew, John’s parents Tish, her sisters Claire and Anne and bother Brian.

Among the many well-known faces in the congregation were President Mary McAleese, Deputy First Minister of Northern Ireland Martin McGuinness and President of the GAA Christy Cooney.

There had been speculation that Michaela’s dad Mickey was to say a few words about his beloved daughter but it all proved too much for the ashen-faced GAA legend.

After the final commendation, Michaela’s coffin was taken from the church to the sounds of the recessional hymn, You Are Mine.

The coffin was carried the short distance to the adjoining cemetery where Michaela was buried in the same graveyard where her grandmother was laid to rest last year.

Mourners, both men and women, wept as Michaela’s remains were placed in the grave to the haunting sounds of Song for Ireland and Lady of Knock.

Ballygawley has never seen such sadness before and hopefully never will again.