THE GLOVES are off for the general election across Donegal after Colr Padraig MacLochlainn challenged Deputy Niall Blaney to a public debate on the economy. 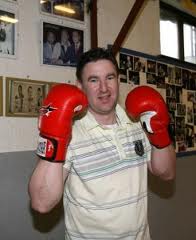 In one of the first public spats in the run-up to the election, the Sinn Fein man says he has had enough of Deputy’s Blaney’s comments on the economy.

His call comes after the Fianna Fail TD claimed his party had taken the “hard decisions” in Government and that opposition parties “have no alternatives.”

Now Deputy Lord Mayor MacLochlainn even wants the Donegal North East ‘talk off’ to be hosted by a local chamber of commerce!

And he says he is confident of delivering the knock-out punch after what he called ‘below the belt’ blows by Deputy Blaney.

He said “Deputy Niall Blaney would have the people of Donegal believe that it is right and fair for every man, woman, and child in the county to take on a debt of tens of thousands of euro each to pay the debts of super rich foreign gamblers who recklessly lent to private banking institutions here in Ireland.

“He would describe that decision and the decision to saddle Irish tax payers with the catastrophic debts of Anglo Irish Bank as “in the national interest”.

“Who does he think he is fooling? His party in Government has led this great country to economic ruin. Here in Donegal, one in three of our workers are out of full time employment, most with no work at all. Our local businesses have been devastated.”

Colr MacLochlainn added that he now looks forward to stepping into the political ring with the Fianna Fail man and allow his mouth to do the talking.

“Worse, Deputy Blaney would attempt to suppress the hopes and ambitions of the people of Donegal that there is a better way. Deputy Blaney states that the opposition parties have no alternative.

“I am happy to let the people decide. I now challenge Deputy Blaney to a public debate where I look forward to outlining in detail our job creation proposals and costed strategy for economic recovery backed by senior independent, progressive economists.

“I also look forward to outlining our determination to separate banking debt from sovereign debt and to send the IMF packing.

“The people deserve real leadership and hope that our economy can recover. Sinn Féin can provide both,” he said.

At the time of going to press, donegaldaily.com had not received a reply from the Blaney camp to Colr MacLochlainn’s challenge.

GLOVES OFF AS MACLOCHLAINN CHALLENGES BLANEY TO PUBLIC ‘TALK OFF’ ON THE ECONOMY was last modified: January 18th, 2011 by Stephen Maguire
Facebook0Tweet0LinkedIn0Print0