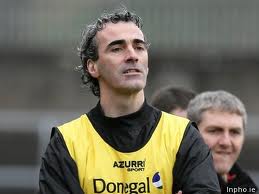 FROZEN PITCH AT BALLYBOFEY FORCES TONIGHT’S GAME TO BE POSTPONED

DONEGAL’S CLASH with Fermanagh in the Dr McKenna Cup tonight has been postponed due to a frozen pitch.

Meanwhile Michael Murphy has reassured County fans that he is fine after  despite limping out of DCU’s O’Byrne Cup defeat to Kildare on Sunday.

The Glenswilly star had to leave the action after just 28 minutes of the clash in Newbridge when he clashed with an opponent.

However, he revealed afterwards that he only left the pitch as a precautionary measure.

“I’m alright. I got a knock on the hip while I was on the ground and it got still, but I’ll be okay,” said the newly appointed Donegal captain.