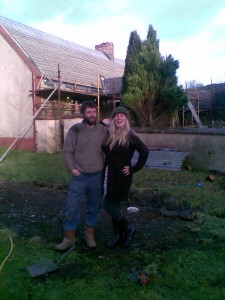 A young Donegal couple’s plan to renovate their 400 year old country cottage has been destroyed by thieves.

Helen and Ian Holyoak had spent the past four years and all of their savings renovating a 70ft cottage outside Raphoe.

The couple, who have lived in a mobile home with daughter Lilly beside the cottage, were about to sell another caravan to fund the next stage of their dream project – a thatch roof.

But disaster struck last weekend when thieves broke into the family’s home and stole the 22ft, five year old touring caravan which was worth about €10,000.

Now Helen said their dream of bringing the 400 year old home in Feddyglass back to life is in ruins.

“I’m a pretty upbeat person but I’m beginning to think I’m plagued by bad luck. This has been the last straw for me.

“Last year we lost a baby after we had been pregnant for five months. I am a pretty confident person, I have a beautiful family and I want everything to be good for us all but sometimes the knocks just keep coming,” said Helen.

Helen, who is a glass-blower and Ian, who is a tree-surgeon, didn’t hear a thing when the gang broke into their grounds.

The heartless gang even took the time to pull off a wheel from the Avondale Windsor caravan which was locked to a large gas cylinder and replace it with a wheel of their own.

Ian says it was obvious that it was a planned operation.

“We have heard since that a number of caravans have gone missing from around Donegal in recent months. But it’s just such a blow to us.

“They must have known we don’t have much. We were not harming anyone and all we were trying to do was put a roof over our heads.

“We would just love to get it back. It looks like it might be damaged because they banged it off a pillar when they were taking it out,” he said.

The caravan which was stolen was of vital importance to the couple because not only was it eventually going to be sold to but the thatch but it also housed workers who helped restore the house.

The couple have received help from around the world from tradespeople who wanted to work on the house from as far away as America and even Japan.

The couple became even more attached to the historic home after Ian found a note with a date from the 1700s on it as well as two hair clips hidden in a wall.

But apart from not having any place to put the workers in now, Helen admits that the break-in has had an even deeper impact for her personally.

“I am scared. I can’t pretend I’m not. To think these people were on our land and they were obviously watching us.

“I feel a little frightened but we have nothing left for anyone else to take now. They have taken everything from us – even our dream of finally being able to restore our house,” she said.