A man injured in a head-on car crash with Donegal’s All Ireland winning captain Anthony Molloy has died in hospital.

Married father of three Daithi White, 38, of Ballisodare, Co Sligo, was driving a Bulmers sales van which crashed on the N15 at about 10am on morning.

Mr White was rushed to Sligo General Hospital but died from his injuries a few hours ago.

Both Mr.Molloy and his friend Paul ‘Feet’ Murrin from Killybegs are still in hospital but their injuries are not believed to be life-threatening. 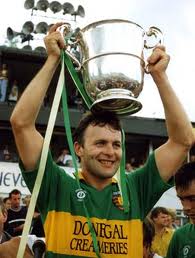 Molloy, 48, was a passenger in the KIA car which was being driven by another man in the direction of Sligo.

The N15 between Laghey and Ballintra was closed for several hours while Gardai examined the crash scene and traffic was diverted.

Gardai in either Ballyshannon on 071 9858530 or Donegal Town would like anybody who witnessed the crash to come forward in confidence.

A Garda spokesman said “Three people were taken to hospital but we will not comment on their identities.

“We would appeal to anybody with any information on the crash to come forward.”