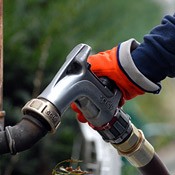 ANOTHER SIGN of how hard times are hitting ordinary families across County Donegal has been revealed by a number of home heating oil suppliers.

Many say hard-pressed families cannot afford normal supplies due to the rising cost of oil – and cuts in their pay packets or benefits which have hit this month.

With a 1,000-litre order topping €780 with many suppliers over the weekend, several revealed that such large orders are a thing of the past.

One supplier told donegaldaily.com: “My customers are really feeling the pinch now. Most people I supply would have thought nothing of a 900-litre or 1000-litre fill in the past.

“But that all changed in January. I’m getting calls from people asking how much €100 will get them.

“Most others are asking for 100 litres or 150 litres. I’m happy to supply them that. There is no issue, because I know how much these people are suffering. They are getting less and less money and everything just seems to be going up in price.”

Another we spoke to said he had found similar requests from customers, adding: “It is a sign of the times we are living in.

“There is no doubt that many people are rationing their oil now. I have quite a few customers who bought big houses during the boom and they just simply cannot afford to heat them all the time.”

People are also being hit by high oil prices at the pumps with more rises over the weekend.