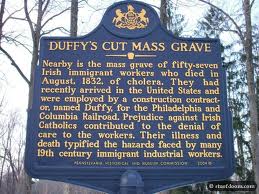 DUFFY’S CUT: REMAINS OF MURDERED DONEGAL IMMIGRANTS TO BE RETURNED TO IRELAND

The remains of Donegal immigrants found in a mass grave near Philadelphia are set to be re-interred in Ireland next year.

Investigations into the deaths of the 57 railway workers at Duffy’s Cut in June 1832 are ongoing using the latest forensic research skills while an archaeological dig continues at the site.

The men travelled from Donegal, Tyrone and Derry to follow their American Dream on board the ship John Stamp but died less than two months after their arrival. It was reported that the men died during a cholera pandemic and buried in a mass grave.

It is understood that contacts have already been made with families in Donegal who may be related to a John Ruddy, one of those believed to have died at Duffy’s Cut.

A ceremony is expected to be held next year to mark the men’s return home.
After extensive research, it was found in 2009 that two skulls bore evidence of blunt-force trauma inflicted before death, suggesting that some of the men may have been murdered.

Duffy’s Cut is the name given to a stretch of railroad tracks some 30 miles west of Philadelphia and originally built for the Philadelphia and Columbia Railroad in the summer and fall of 1832.

Railroad contractor Philip Duffy hired the Irishmen to lay this line through the area’s densely wooded hills and ravines.

Dublin-based Tile Films made the documentary Ghosts of Duffy’s Cut a few years ago about the events surrounding the mens’ deaths and the efforts of Immaculata University history professor William Watson and his twin brother, the Rev. Frank Watson, to uncover what happened at the site.

Research by the Watsons and their team found evidence that many of the Irishmen who died may have been murdered before they could attempt to escape their cholera-stricken campsite.

In March 2009 after five years of searching the Watson brothers discovered the mass grave of the victims of the 1832 tragedy. A second documentary Death on the Railroad, by Tile Films, is to reveal the latest in the tragic saga.

On their website, Tile Films state: “Death on the Railroad is a classic story involving foul play, cover ups, a one hundred and seventy year old mystery and voyage of discovery for the Watson Brothers and their project team.

“This is a Science/History documentary that sets out to solve the mystery of what happened in Duffy’s Cut. Using the latest forensic and scientific investigative techniques, DNA, forensic analysis, facial reconstruction and historical detective work in Ireland and the USA, our modern detectives, the Watson Brothers and the team of experts they have assembled, will unravel this extraordinary story.

“Tile Films were at the site filming the Watsons in 2009 and filmed the discovery of the first bodies.

“All the remains found so far indicate [the men] were brutally murdered,” Prof William Watson said in an interview recently. “Some of them were just bludgeoned [to death]. It’s unbelievable.”

“It was one of those things that had to be investigated,” Watson said. “We started looking to see if there was any reality behind the dimly remembered stuff, so we began looking into Pennsylvania archives and flushed it out even further.”

In 2004, the Watsons were also instrumental in having a memorial plaque placed on the site.

It states: “Nearby is the mass grave of fifty-seven Irish immigrant workers who died in August, 1832, of cholera,” the marker reads.

“They had recently arrived in the United States and were employed by a construction contractor named Duffy … Prejudice against Irish Catholics contributed to the denial of care to the workers. Their illness and death typified the hazards faced by many 19th-century immigrant industrial workers.”

A newspaper report from the time states that a cholera epidemic in the camp, said  Prof Watson.

“Some of the men panicked and tried to get out and were forced back in. Another article, from November 1832, says the earlier story was not accurate and that there were only eight or nine men [who] died.

“The fact is, they were murdered,” Watson said.

“In the first layer of burials, we suspect most of the men are going to be victims of cholera, which leaves no physical traces. But, we believe the others were killed to make sure there would be no cholera getting out of that valley.”

The brothers also helped to establish the Duffy’s Cut Project, an ongoing archival and archaeological search into the Irishmen’s lives and deaths and seeks to provide insight into early 19th Century attitudes about industry, immigration, and disease in Pennsylvania.

A fundraiser organised by the Project is to be held at Immaculata University’s Great Hall in Philadelphia on February 25th.

No date for the second documentary’s broadcast has been set.

DUFFY’S CUT: REMAINS OF MURDERED DONEGAL IMMIGRANTS TO BE RETURNED TO IRELAND was last modified: January 31st, 2011 by admin