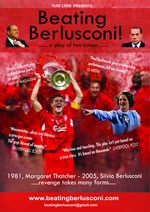 LIVERPOOL FANS get to relive THAT famous Champions League victory over AC Milan this Saturday night when a cracking play based on the triumph comes to the Balor Theatre in Ballybofey.

Beating Berlusconi! is based on the true story of a Liverpool fan who ended up sitting next to Silvio Berlusconi at the Attaturk Stadium – the scene of Liverpool’s amazing back from the dead Champions League final victory.

Despite threats from his wife and bank manager, middle-aged Kenny Noonan travels to Istanbul to watch Liverpool play AC Milan in the Champions’ League final.

He carries the scars of thirty years as a Red and of living in a city which has been demonised. 3-0 down at half time a somewhat morose Kenny goes in search of a consolation beer and somehow manages to blag his way into the AC Milan VIP box where he proceeds to help himself to free champagne and salmon.

When Liverpool fought back to equalise Kenny couldn’t suppress his feelings, Berlusconi lost his temper and the two squared up.

Hauled away by Turkish security guards, Kenny was amazed to be taken to the Liverpool VIP area – they had mistaken him for a Liverpool VIP.

Fresh from ecstatic reviews and huge word-of-mouth in 2009, Paul Duckworth and his forty characters take to the road again in this hilarious, lump in your throat comedy.