IN what is certain to be the first of many awards, Killybegs soccer sensation Seamus Coleman has been named Republic of Ireland Under 21 Player of the Year. 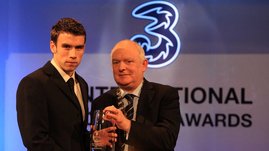 The modest Everton star has burst onto the scene over the past couple of seasons and has already attracted attention from many of the world’s top clubs.

He joined many well-known faces including Shay Given, Kevin Doyle and John O’Shea.

Although Reading’s Shane Long may have scooped the 3/FAI Young Player of the Year Award, Coleman may also have been many people’s choice in this category.

And although he has yet to start a campaign for the Irish senior team, many think the former Sligo Rovers man’s turn could come on Tuesday night when the boys in green take on Wales in a friendly international in Dublin.

On the same night that Coleman received his award, another home-grown star, Kevin Doyle picked up the Senior International Player of the Year Award.

Many feel that if Coleman continues to grow at the rate he has impressed his Everton boss David Moyes, it won’t be long before he follows in the footsteps of Doyle.