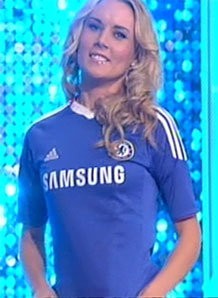 MODEL Collette McBarron was bombarded with abusive messages after her appearance on Sky Sports show Soccer AM, it has been revealed.

The Donegal Town native and ex-squaddie says she was stunned she was bombarded with threats via Facebook because of the British programme’s links with the British Army.

She appeared on the show wearing a Chelsea top and skimpy shorts.

Collette, 26, who hit the headlines two years ago when she controversially quit her job as an army lieutenant.

“I’ve received quite a few private mails full of abuse since the show aired and some of them have been really threatening,” said the London-based private fitness instructor.

“Some of them have been claiming that the Irish army ‘won’t be happy with you,’ and things like that, because the show is broadcast to the troops in Afghanistan.

“I was actually quite shocked, it does put a bit of a dampener on it but I’ve been trying not to let it get to me. It’s coming up on two years since I left the army and as far as I’m concerned I made the right decision.

“That’s all in the past for me now and I just wish people would let me get on with my life. I live in London now. If people want to give out about me doing the show then that’s up to them.”

The Donegal woman told Sky viewers of her love for Chelsea – and says she is hoping to do more work for SkySports.

She rejected the view the show is sexist.

Collette added: “I would completely disagree with anyone who thinks there was anything sexist about what I wore on the programme.

“I mean there are loads of women in the audience and Helen Chamberlain has been presenting the show for years. It’s just all about the love of soccer.

“When I was on, I had fun. I was never made to feel like I was not an equal to anyone. I never felt I was being taken advantage or anything like that. It was just really light-hearted stuff,” she added.

She also backed the firing of Andy Gray, adding: “When he’s in such a position where his opinion has a lot of influence, I don’t think he can be as prejudiced as he is.

“It was a shock when he was let go but they do have a policy where they have no tolerance for anything like that.”