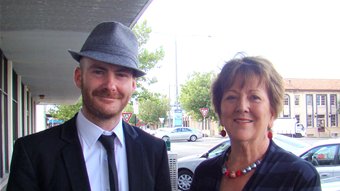 IT’S NOT just accountants, solicitors, plumbers and builders heading Down Under – the former assistant director of the Letterkenny Regional Cultural Centre has joined the new life in Australia.

John Cunningham is the new Director of the Warrnambool Art Gallery in South West Victoria.

And he has already caused a stir – by insisting works of art are loaned into people’s homes!

And the local Chair of the Art Gallery Community Advisory Committee, Glenys Philpot, says ‘no one will go to sleep’ while John is there.

A couple of contacts in Australia pointed the position out to John, who then set about researching Warrnambool via the web before applying for the position which became an opportunity he ‘couldn’t turn down’.

The idea of putting the collection into people’s homes is part of his plan to ‘animate the city’ through the gallery – he talks about the gallery’s limits as stretching beyond the physical walls of the space, pushing them all the way out to the very edges of Warrnambool itself.

He’s set himself three months to come up with a vision for the gallery, and is also currently reviewing some of the gallery’s past projects.