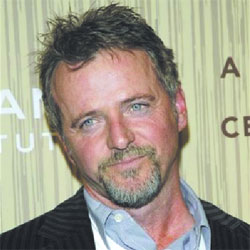 HOPES THAT DONEGAL’S LATEST MOVIE WILL BE HOLLYWOOD BLOCKBUSTER

A HOLLYWOOD movie starring Aidan Quinn and shot on location in Inishowen and Letterkenny will be released tomorrow – with hopes it could be a massive boost for tourism in the county.

A Shine of Rainbows also stars Connie Nielson as well as Letterkenny schoolgirl Tara Scully, a pupil at Woodlands NS.

Directed by Emmy-winning director Vic Sarin the film had a budget of €3.5m. The film is based on a novel by Lillian Beckwith and tells the story of how a lonely orphan’s life is transformed by an extraordinary woman who teaches him to conquer grief and discover the magic in nature and himself.

When he was asked about the movie recently Quinn said his summer spent here two years ago was ‘fantastic’ adding that he hadn’t seen rain for two months!

However when he was here filiming he was asked if he would consider buying a holiday home in Inishowen.

Mr Quinn replied: “No. There’s too many holiday homes here. There’s way too many and I know that 60 to 80 per cent of them are empty.”

The 51 year-old actor, who says he loves to spend time in Ireland, also urged the authorities to take “better care” of tourist attractions across the peninsula.

He said he was particularly concerned following a visit to the Anglo-Norman castle at Greencastle – which features in the background of the Derry crest.

“In Greencastle, they might just look at cleaning out some of the litter because it has become a bit of a dumping ground,” he said.

He added: “I do think that it is important for the government, the heritage society and everyone else to take a look at how we treat our historic monuments because they attract tourists and bring money into the county. Even if you don’t give a toss about history, it’s good business to take good care of them.

“There are some which I think have been neglected.

“I’ve seen a few. I don’t want to embarrass the council or anything because we’ve received such good treatment here and it wouldn’t be my place to say.

“I thinks it’s important – and I’m going out on a limb here to say our heritage because it is my heritage as well – to preserve it.”

HOPES THAT DONEGAL’S LATEST MOVIE WILL BE HOLLYWOOD BLOCKBUSTER was last modified: February 17th, 2011 by admin