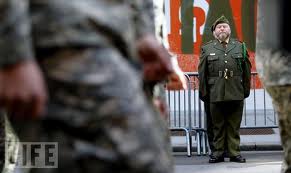 NO JUNKETS HERE….DONEGAL DEFENCE FORCES PAYING THEIR OWN WAY TO NEW YORK

MEMBERS of the defence forces reserves in Co Donegal are to travel at their own expense to this year’s St Patrick’s Day parade in New York, donegaldaily can reveal.

More than 40 members of the 58th Reserve Infantry Battalion are making the trip to the 250th Big Apple St Patrick’s Day parade.

The Battalion is a unit of the defence forces reserve in counties Donegal – as well as Sligo and Leitrim.

It has close links to New York’s 69th regiment, one of whose generals was Co Sligo native, Michael Corcoran.

The 58th Battalion Reserve spokesperson, Comdt Kevin McDonald, said the 40 members would travel “totally at their own expense and at no cost to the taxpayer”.

It will be interesting to see how many of our new Ministers will be making similar trips……at their own expense.

NO JUNKETS HERE….DONEGAL DEFENCE FORCES PAYING THEIR OWN WAY TO NEW YORK was last modified: February 27th, 2011 by admin