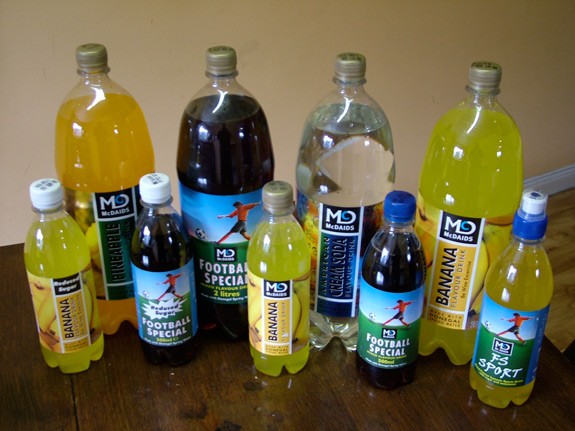 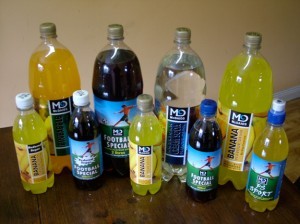 FOOTBALL SPECIAL – the soft drink of choice in north Donegal for half a century – is set to be shared with the nation.

The Ramelton-produced fizzy fruit drink is to be sold across the country with the owners hoping it can score a goal for the county!

Owner Edward McDaid said: “It is a strange product in many senses. Whatever it is about it, it seems to hit a memory button and conjure up pleasant memories of childhood, even with people who haven’t tasted it before.”

His father Jim and his uncles chanced on the unique combination of ingredients over 50 years ago and luckily his uncle Eamon – who had trained in a soft drinks company in Belfast – recorded the quantities so it could be recreated.

It has been dubbed the Irn Bru of Donegal – with English visitors comparing it to a drink in some parts of England called Vimto.

“My father was a founder member of the Swilly Rovers Football Club in Ramelton and they were trying to come up with a soft drink that could be put into the cup after a win, instead of whiskey.

“The fruit syrup flavours that are used are all fairly common and shouldn’t belong together but they do,” he said.

The base ingredient for the drink is indeed unique to Ramelton in the form of spring water from McDaid’s very own underground spring well, less than 100 metres away from the production plant.

Sugar, seven different syrups and a heading liquid are added to the water, which is then carbonated and bottled.

Edward is about to add a marketing and sales person to his six-strong staff and aims to rebrand and triple production at his plant as the product goes nationwide in June. Although business has been hit by the recession, he believes Football Special, and its sister flavours, banana, pineapple and cream soda, will go down well with fizzy drinks fans.

“If Donegal people for all these years have been having this experience and enjoying it, could we be so different from everywhere else in the country?” Edward asked.

As for the secret recipe, as with Coca-Cola, its maker’s lips are sealed.

“Only myself and one other person know and we never travel on the same plane. I fly Ryanair and he takes the Swilly Bus,” he laughed.