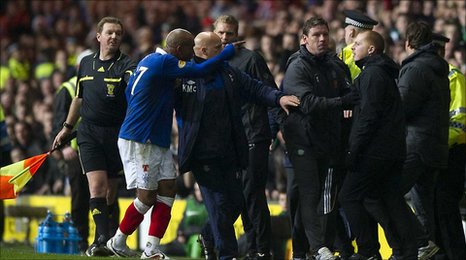 UGLY SCENES AT PARKHEAD AS HOOPS KNOCK RANGERS OUT OF CUP

Rangers players made a show of themselves as they lost the plot – and the match – and had three players sent off as they lost an ill-tempered Scottish Cup fifth-round replay against Celtic.

Steven Whittaker received a second booking on 36 minutes as the match exploded into controversy.

Mark Wilson fired Celtic in front early in the second half and Rangers failed to respond.

Georgios Samaras hit the post as Celtic came close to a second and Rangers pair Madjid Bougherra and El Hadji Diouf were also ordered off – the latter after the final whistle.

Neil Lennon’s side will now face Inverness Caledonian Thistle in the quarter-finals and Celtic remain in contention to complete a domestic treble, a feat now out of Rangers’ reach.

Rangers, who lost forwards Nikica Jelavic and Kyle Lafferty in the run-up to kick-off through a hamstring injury and tonsillitis respectively, struggled to get out of their own half early on and Sasa Papac escaped a booking after felling Wilson.

However, the visitors did carve out a chance when Diouf, deployed in a lone striker role, ran on to Whittaker’s pass and goalkeeper Lukasz Zaluska, in for the suspended Fraser Forster, came off his line somewhat hastily.

Diouf rounded the stopper near the byeline and crossed but Daniel Majstorovic headed away and Celtic eventually mopped up the danger.

Ki tried his luck from distance with a fierce left-foot shot but the attempt was always rising over the top.

Having shown leniency in the opening 27 minutes, referee Calum Murray’s patience over scrappy fouls finally wavered when Whittaker was booked for tripping Ki.

And Whittaker received his marching orders when his reckless lunge on Emilio Izaguirre was punished with a second yellow and then a red card.

The incident provoked an angry exchange between Diouf and the Celtic bench and, after the Rangers bench got involved, Diouf was booked and Rangers assistant manager Ally McCoist and Celtic boss Neil Lennon were given a warning by referee Murray.

When the play re-started, a dreadful passback by Maurice Edu allowed Georgios Samaras a free shot at the Rangers goal but goalkeeper Allan McGregor blocked well and the ball rebounded off Samaras and out of play.

Kris Commons flashed a shot over from the edge of the box as Celtic continued to push.

Celtic captain Scott Brown joined team-mate Majstorovic in the book and John Fleck was also yellow-carded as an ill-tempered half drew to a close, Ki’s injury-time free-kick creeping over the bar.

But, though the action on the park had taken a break, there was more drama in the tunnel as players and backroom staff from both sides remonstrated while they trooped into the dressing rooms.

Celtic were on the front foot at the start of the second half and went ahead when Izaguirre’s cross found Wilson at the back post.

The full-back’s initial shot was superbly blocked on the line by the head of Papac but the ball broke back to Wilson and his second effort bounced over McGregor and Bougherra into the net.

Rangers were almost gifted an equaliser when Charlie Mulgrew’s wayward header looped back towards his own goal and Zaluska had to retreat to clutch the ball under pressure from Diouf.

Bougherra was booked for catching Hooper and the Celtic striker required treatment off the park before returning to the play.

Another vicious drive by Ki swerved just wide of McGregor’s goal and Samaras blasted a shot against the base of the post after running on to Brown’s incisive through ball.

Samaras had two more chances to score, his first header collected by McGregor and his next cleared off the goal-line by Wylde.

Rangers threw Kyle Bartley forward in search of a goal and a foul on the big defender gave the visitors their only real shot at goal but Diouf’s free-kick was straight at Zaluska.

The Ibrox side were further depleted in injury time when Bougherra took out Commons and, after furious protests from the Algerian, the defender got his second booking and a red card.

And the same fate befell Diouf after the final whistle, the forward’s dissent also incurring a second caution. He was then surrounded by police as he attempted to throw his jersey to the Rangers’ fans.

There was another clash on the touchline as Lennon and McCoist exchanged words and had to be held apart as a controversial night drew to a close.

UGLY SCENES AT PARKHEAD AS HOOPS KNOCK RANGERS OUT OF CUP was last modified: March 2nd, 2011 by admin