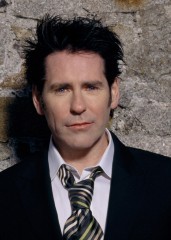 Grab your tickets now for the cutting-edge new show from Irish dance supremo Breandán de Gallaí which premiers in Donegal next month.

The Gaoth Dobhair dance legend and former Principal dancer with Riverdance is bringing his innovative new dance show, Noċtú, to Letterkenny’s An Grianan Theatre in April.

From the music of Imelda May to Leonard Cohen to Stravinsky, Noċtú is set to reveal widely differing perceptions of Irish dance.

Speaking to donegaldaily.com, choreographer and director de Gallaí, said Noċtú will give a new insight into the life of an Irish dancer.

“It’s a rather abstract concept and will incorporate Irish and modern dance and explore the boundaries of Irish dance, ” said de Gallaí.

Noċtú tells the story of Irish dance from the viewpoint of the dancer using movement, narrative, parody, comedy and pathos.

The show pushes the boundaries of the Irish dance tradition and through a series of
vignettes the audience will see behind the scenes and get under the skin of those who negotiate the politics, the struggles, the highs and the lows, the joy and the pain of being an Irish dancer.

A new RTE series which followed the making of Noċtú is set to be broadcast this summer.

The reality series, Dance Off, followed de Gallaí as he auditioned dancers from all

over the globe to bring the world’s best Irish dancers together to create Noċtú.

From the initial audition stages to gruelling boot camps, Dance Off comes to a climax when 13 Irish dancers from Ireland, Scotland, England, Australia, Canada and Hungary take to the stage for the premier of Noċtú.

Now it’s Donegal’s turn to see the results of this worldwide search before Noċtú hits the small screen.

Acclaimed dancer, de Gallaí has led performances to more than 600 million people worldwide as lead dancer during his nine years with Riverdance.

A busy man, he is also studying for a PhD at Limerick University.

Noċtú is at An Grianán Theatre, Letterkenny, on April 26th.

Tickets are expected to sell quickly so log on to www.angrianan.com asap.

Kevin Cassidy to feature as part of...