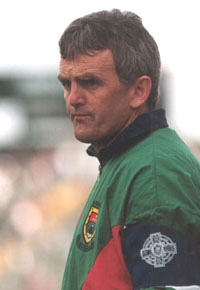 FORMER county GAA star Martin Carney has spoken of how he felt playing against Donegal after he switched to play for Mayo.

Carney left Donegal in 1979, after winning two Ulster titles, to team up with Mayo and found playing against his native county to be a surreal experience.

“It was something I was very conscious of. I found it very strange playing against Donegal, found it difficult to adjust to it,” he said in an interview today.

“I had been in Mayo for five years before I joined them, but Donegal was still the team whose result I would look out for and suddenly I was playing against them.

“There was a lot of travel involved, but the commitment required then wasn’t anything like what is expected now.

“Things were changing in Donegal too. The side I had come through with was just starting to break up and I saw my future, workwise and everything else, in Mayo.”

Carney did have links to Mayo. His uncle Jackie was part of the 1936 All-Ireland-winning side and he later managed the side during their back-to-back 1950-51 successes.

“I wasn’t an absolute stranger to Mayo by any stretch. I was well versed in their history and tradition, but it was still strange,” admitted Carney.

“I remember playing against Donegal in a league match in my home town of Ballyshannon in 1985, that was a particularly tough, hard-hitting match.”

By the time Donegal had their finest hour in 1992, Carney had long been ensconced in Mayo.

He went to that year’s forgettable All-Ireland semi-final between the two sides and, in his own words, “kept the head down”.

When Carney played for Donegal for the last time, he was operating in midfield alongside a gangly school kid called Packie Bonner who would shortly become Jock Stein’s last signing for Celtic.

‘IT WAS STRANGE PLAYING DONEGAL’ ADMITS EX-COUNTY STAR WHO SWITCHED TO MAYO was last modified: March 12th, 2011 by admin