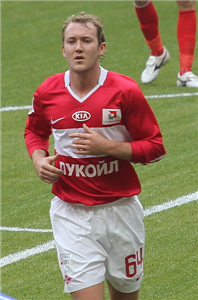 Spartak Moscow winger Aiden McGeady is a possible transfer target for Liverpool, it is being reported.

The 24-year-old has been linked with a move away from Spartak at the end of the season, with Zenit St Petersburg leading the chase for the former Celtic player.

Juventus are also believed to be interested in McGeady, but according to Caughtoffside.com, Liverpool manager Kenny Dalglish is also keen on signing the player this summer.

McGeady, whose grandparents are from Glassagh in Gaoth Dobhair where he is a regular visitor, has impressed since his £9.5million move from Celtic Park last summer and his performances have led to reports that Juve are prepared to offer more than double that figure to lure him to Italy.

But although Spartak will be reluctant to sell, they will be happy to make such a profit in a short space of time. The Moscow club will also be happier to entertain offers from clubs outside of their own league rather than sell to a rival such as Zenit.

Liverpool are set to spend big in the transfer market this summer as the club’s owners look to turn the Reds into genuine title contenders again.

And with the Merseysiders struggling for real pace and width in their midfield, McGeady would be a perfect fit for Liverpool, who are looking to recruit young, talented players who can improve the current squad.

The fact that Irish international McGeady can also play as a forward as well as out wide will also be seen as a positive for the Merseysiders as they look to strengthen all areas of their squad.