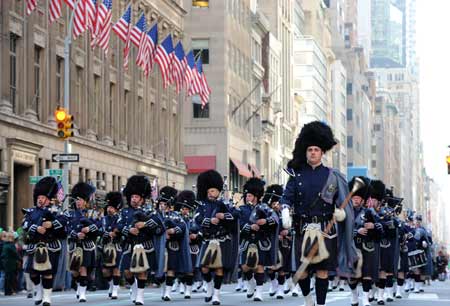 TAOISEACH ENDA Kenny might be meeting US President Barak Obama at the White House today as the Irish take over the States – but one survey says the people of Donegal should get ready for an invasion this year by the Yanks.

The fun survey by the website IrishCentral.com surveyed 2,000 Irish-Americans.

And 31% of people said they plan to visit Donegal.

And we might get some of that old property boom back – with 9% of those who would like to buy a holiday home picking Donegal as their favourite destination.

Other parts of the survey found Irish-Americans believe Liam Neeson is the most popular Irish person with 84% approval.

Other findings were as follows:

ST. PATRICK’S DAY – A TIME FOR FRIENDS AND FAMILY

Close to seven in ten (69%) will celebrate with a special dinner among friends or family.

Debunking the myths of some, St. Patrick’s Day in the U.S. is not just about parades, green rivers, drinking and merrymaking; three in five (59%) will celebrate the religious significance of the feast day.  Of these, just over one quarter (will attend mass.

70% of respondents have visited Ireland and 22% plan to visit this year and three in five (61%) will stay between 1 and 2 weeks.

89% will fly directly from the United States.

The main motivation for visiting is to ‘explore the country and see the sites’ (69%) and half will visit relatives.

38% will try to trace their ancestry while in Ireland.

A third of respondents believe that Riverdance is most symbolic of modern Ireland while 23% agree that the Galway Arts Festival does so.

Just 3% of Irish Americans/Irish living in the U.S. own property here, but a further 33% would be interested in buying property here.

For 53% of these, the main motivation would be to have a property available for personal and family vacations.

56% would prefer a rural to an urban or suburban setting.