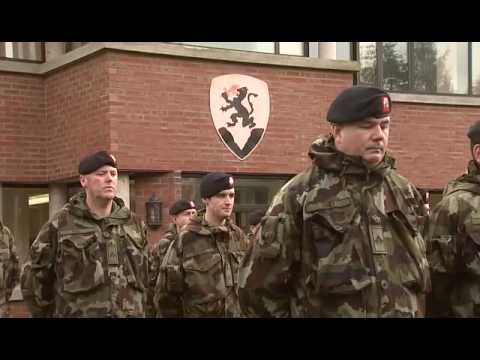 A FORMER soldier with the 28th Infantry Battalion which worked throughout Donegal during the Troubles and served overseas with the UN has called for a proper memorial to the force in Donegal Town.

Proud Kieron Ryan says he was delighted with an exhibition in Letterkenny which showed off the work of the soldiers.

But now he says the Diamond in Donegal Town should have a memorial to all those who served in the battalion.

He told donegaldaily.com: “I served for 21 years with the 28th Inf Bn and enjoyed every single moment of my service and I can honestly say that it is by far the best unit within the Defence Forces.

“Although the exhibition goes some of the way to educating the public about the Battalion and it’s history, I think there should be a memorial statue erected in honour of the 28Th Inf Bn in the Diamond in Donegal Town.

Mr Ryan said such a move would allow people to pay their proper respects.

He told us: “It should be placed in such a position that wreath laying ceremonies should be able to take place and that it is accessable to the public.

“It is time that the sacrifices that we have made both in protecting the people of Donegal and the State, plus also honouring those from the Battalion who served as peacekeepers, and those who made the ultimate sacrifice by laying down their lives in the service of peace.”

The members of the 28th Infantry Battalion, past and present, were conferred with the Freedom of Donegal by Donegal County Council at a civic reception in their honour in Lifford in 2009.

And two weeks ago the How We Remember exhibition at Donegal County Museum in Letterkenny was formally opened with a parade of 60 troops from the 28th Infantry Battalion from the town centre to the museum.

EX-SOLDIER WANTS MEMORIAL TO UNSUNG HEROES IN THE DIAMOND IN DONEGAL TOWN was last modified: March 16th, 2011 by admin