UPDATED: CROWDS ESCAPE INJURY AS MOTORBIKE GOES OUT OF CONTROL AT PARADE

A baby escaped serious harm when a motorcyclist taking part in Letterkenny’s St.Patrick’s Day Parade went out of control. 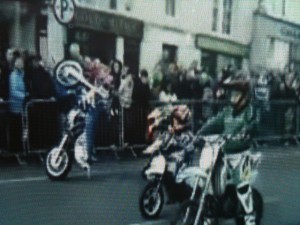 The man, who was part of the Errigal Motorcycle Club, did a ‘wheelie’ but lost control of his bike sending it crashing into safety barriers.

A child can be clearly seen directly behind the crash barrier sitting in a buggy as part of the 10,000 bumper crowd which attended the event.

A video of the accident has been posted on a YOU TUBE video which can be seen at the end of this article.

An ambulance was called to the scene but nobody required attention.

A spokesman for the motorbike club confirmed there was an incident involving a young member and described it as “an unfortunate accident” which they are taking “very seriously.”

Letterkenny Gardai have also confirmed they are aware of the incident.

CEO of Letterkenny Camber Toni Forrester said they were satisfied with the safety procedures in operation on the day and said the incident looked worse than it was.

““ Letterkenny Chamber organises the annual St.Patrick’s day parade. We have security and safety measures in place as was evidenced in the parade last week.

“We take the safety of our participants and spectators very seriously and will of course take this incident into account when we review our procedures for next year’s parade. Civil defence, Gardai and our own security staff and stewards were on hand quickly to ensure any damage done was minimised and thankfully no serious injury was reported,” she said.

NOW SEE THE VIDEO ON

UPDATED: CROWDS ESCAPE INJURY AS MOTORBIKE GOES OUT OF CONTROL AT PARADE was last modified: March 22nd, 2011 by Stephen Maguire