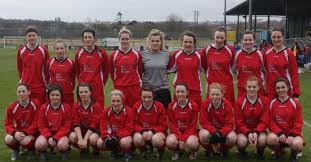 SUPER STRIKER Geraldine McLaughlin scored both goals for Loreto Secondary School on Tuesday as the Letterkenny side overcame Eureka Secondary School from Kells in the Umbro FAIS Senior Girls Final at Tolka Park.

The playmaker, one of Donegal’s key GAA Ladies’ team players, was Loreto’s hat-trick heroine from their 3-2 semi-final victory over Ursuline from Sligo a fortnight ago and repeated the match-winning display in the final.

All the goals arrived in the first half. Áine Bennett, Eureka’s goalscorer in their semi-final victory, fired them into a twelfth minute lead. She controlled a Shianne Swarres pass, cut back in from the right and drilled a low shot into the bottom left corner from an acute angle.

McLaughlin began to assert her dominance in the middle and equalised nine minutes later.

She put the finishing touch to a flowing move that involved Amy Thompson and Ciara Grant exchanging passes before finding McLaughlin who rattled the net with a rising shot from the edge of the penalty area.

The midfielder inflicted more damage on the Meath school by netting the winner on 33 minutes. Her free-kick from just inside the Eureka half carried the required power to beat goalkeeper Jennifer Newman.

Loreto thought they had extended their advantage five minutes from full-time when substitute Alice Diver smashed the ball home from twenty yards but the effort was disallowed for offside.