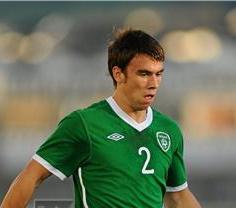 KILLYBEGS soccer star Seamus Coleman is back training with the Ireland squad after shaking off an ankle injury – and hopes to be starting for Ireland this Saturday against Macedonia.

A large contingent of family and friends will be making the trip to the Aviva Stadium hoping the Everton star will start an international for the first time.

The 22-year-old midfielder made his full debut in a Nations Cup match against Wales last month and says playing a qualifying fixture is the next step, and is currently with the Irish squad ahead of a Euro 2012 qualifying Group B clash with Macedonia at the Aviva Stadium and a friendly against Uruguay next Wednesday

And the former Sligo Rovers player told evertontv: “It is always good to go away with your country, hopefully I can have a good week in training and we’ll see what happens. I have only been away a couple of times so it is still exciting getting the call and I am looking forward to the experience.

“We have got a big qualifying game against Macedonia so hopefully we can get the three points. I always wanted to play for Ireland and I have done that now so the next step is a qualifying game. I am not sure if I will play or not but I am just glad to be a part of it.”

Coleman has adapted to the Premier League in impressive fashion, and has made 16 consecutive starts in Everton colours.

“I am playing at Everton Football Club, it is a big club and I know I am not going to play every week,” added Coleman. “I have been lucky to play a lot of games but the manager decided to take me out for a couple of games and I am not going to argue with him.

“He put me back in against Fulham and I tried my best and got on the score sheet. I felt a little fresher after the rest – it is not that you want – you want to play every week, but the manager knows what is best for me.”