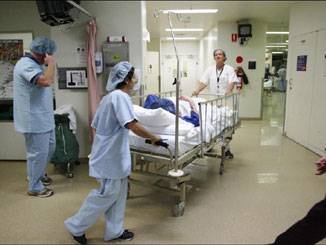 The  average wait-time for outpatients at Letterkenny General is 253 days, new figures have revealed, but Donegal patients attending Sligo General can expect to wait just 26 days.

The Letterkenny facility has however performed better than anywere in the country when it comes to bowel cancer screening with just two people waiting longer than three months.

According to the HSE’s Performance Report for December, waits in medicine were 253 days in Letterkenny, 233 days in Galway and 217 days in Cork University Hospital (CUH), while the average wait times for OPD consultant-led surgery clinics were 382 days in Galway, 276 days in Kerry and 225 days in CUH.

The HSE target is that all new routine referrals should be seen within 90 days.

One major problem, it appears, is selfish patients failing to either turn up for appointments or cancel them. This costs the service millions of euro a year.

The waiting time for a routine ENT outpatient appointment at Temple Street Children’s Hospital, Dublin, varied from between 35 weeks for one consultant and 75 weeks for another consultant at the same hospital.

The HSE has said it plans to issue better information and guidelines to GPs in order to reduce the number of unnecessary referrals to consultant-led outpatient clinics.

It believes that more “intelligent support” could help GPs to treat more of their own patients who have problems that are typically referred to a consultant.

It also plans to introduce standardised referral templates for doctors.

Last year, the HSE announced plans to extend the working day of radiographers to tackle slow access to diagnostics, which is a critical bottleneck in the hospital system.

Many specialties cannot meet demand for services and patients can wait years for appointments in neurology, dermatology, orthopaedics and rheumatology.

In addition, a separate problem  was that many patients failed to attend their outpatient appointment without cancelling beforehand, the HSE added.

Meanwhile, commenting on the bowel cancer screeing, a spokesman for the National Treatment Purchase Fund (NTPF) said: “There is absolutely no need for any public patient to be waiting more than three months for a colonoscopy”.

The NTPF buys treatment in private hospitals for public patients languishing on waiting lists. Anyone waiting longer than three months can contact it on 1890 720 820 to see whether they are eligible for treatment.