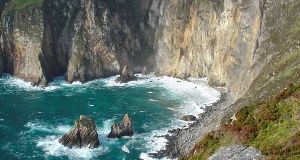 DONEGAL RECEIVED a massive tourism boost today – by being included on a world famous route followed by a million hikers a year.
The county is being included in the so-called ‘International Appalachian Trail’, an extension of the world-renowned walking route on the Canada/US border.

The original trail stretches for 2,000 miles along the Appalachian Mountains from Georgia to Maine and attracts 2.5 million hikers every year.

The new proposed link will see the Irish section of the international trail start at the coastal cliffs of Slieve League in Co Donegal and extend to the Antrim coast, finishing in Ballycastle.