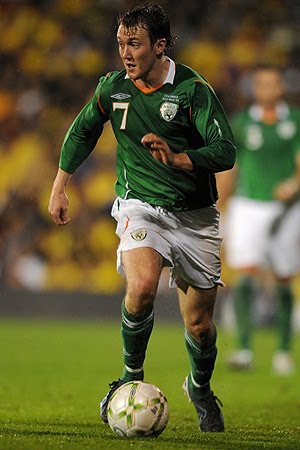 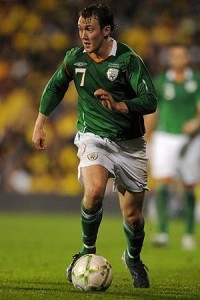 DONEGAL’S AIDEN McGeady opened the scoring with his first ever goal for Ireland in a 2-1 win over Macedonia tonight.

McGeady – he is ours! – showed super skills throughout the game at the Aviva stadium.

And another Donegal descendant James McCarthy finally made his full debut, coming in for the final few minutes.

Keiren Westwood marked his first competitive start for the Republic of Ireland with a vital save to deny Macedonia a battling point in Dublin.

The Coventry goalkeeper, winning just his sixth senior cap, rushed from his line to deny Ivan Trickovski with 15 minutes remaining as the visitors fought back from a calamitous start to push Ireland all the way.

Giovanni Trapattoni’s men had raced into a 2-0 lead within 21 minutes, thanks mainly to two glaring errors from Macedonia goalkeeper Edin Nuredinovski.

He allowed Aiden McGeady’s shot to beat him at his near post with just 85 seconds on the clock to hand the winger his first senior international goal in his 38th appearance, and then spilled Derry man Darron Gibson’s free-kick at the feet of skipper Robbie Keane with predictable consequences.

However, Trickovski pulled one back on the stroke of half-time to keep the game in the melting pot, and the second half was far too even for the liking of anyone in green.

Westwood’s intervention ultimately denied Macedonia the chance to write another chapter in their history of inflicting wounds on us.

We join leaders Russia and Slovakia on 10 points at the top of Group B as a result of a victory which was far harder fought than it promised to be in the early stages.

Trapattoni had predicted with some certainty that Mirsad Jonuz’s side would get men behind the ball in an attempt to frustrate Ireland, and that they would be a threat only from set-pieces.

In the event, they played with commendable endeavour to ensure that a defence including three men – Westwood, Kevin Foley and Darren O’Dea – making their competitive debuts had to remain on its toes.

The Ireland boss insisted he had no worries about throwing Coventry’s Westwood in at the deep end in the absence of the injured Shay Given, and his confidence proved well-founded.

Jonuz, however, could not say the same of his last line of defence.

Nuredinovski endured a night to forget at the Aviva Stadium as he gifted the Republic two goals inside the opening 21 minutes.

The game was a little more than a minute old when McGeady, who had been sent out under explicit instructions to shoot on sight, cut inside from the left and did just that.

His low drive was well struck, but it should not have perhaps eluded Nuredinovski’s grasp to nestle in the bottom corner. We didn’t care – we were jumping up and down!!!!

Things could hardly have started more perfectly for Trapattoni and his players, and they went close again with 11 minutes gone when Kevin Doyle climbed well to head down Kevin Kilbane’s cross, and it took a brave intervention by the Macedonian goalkeeper to prevent Keane from extending his side’s lead.

Doyle was clearly in some discomfort in the aftermath of the attack and his evening ended with just 17 minutes gone when he hobbled off, much to the concern of his international manager and no doubt Wolves boss Mick McCarthy.

Shane Long replaced him and within seconds of the Reading man’s arrival, Ireland extended their lead.

Gibson, another man who had been told to try his luck from distance, blasted a 21st-minute free-kick towards goal and saw Nuredinovski fumble it into the path of the ever-alert Keane, who bundled it over the line to double the dose.

But if the home fans among a sparse crowd thought the points were safe, they were mistaken as Macedonia launched a spirited fightback.

With midfielder Darko Tasevski prompting behind strikers Goran Pandev and Ilco Naumoski, they began to make an impression and they got their reward on the stroke of half-time when Trickovski accepted Pandev’s pass and cut inside Richard Dunne, his deft finish giving the visitors hope.

They returned in confident mood and went close to an equaliser within three minutes of the restart when Pandev guided a volley just wide from Goran Popov’s teasing cross.

But they were perhaps fortunate to still have 11 men on the pitch seconds later when central defender Boban Grncarov planted his studs into the side of Long’s head with a ridiculously high challenge.

We had resumed in sluggish fashion, but we found our tempo once again as the half wore on with McGeady seeing another rasping effort blocked and Damien Duff thumping a low drive inches wide.

But Macedonia were refusing to lie down and the tension mounted as they forced a series of free-kicks to fulfil at least part of Trapattoni’s prophecy.

Ireland had Westwood to thank for preserving their lead with 15 minutes remaining when midfielder Muhamed Demiri lifted the ball over Dunne to find Trickovski, the goalkeeper coming swiftly from his line to make an invaluable block.

Keith Fahey replaced Gibson and James McCarthy was brought on for Keane as Trapattoni attempted to close the game down, but there was a tangible sense of relief on the final whistle.