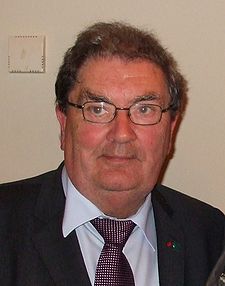 DURING THE darkest days of the Troubles, political leader John Hume came to Donegal to escape the madness of it all.

And this weekend the people of Donegal will gather to say ‘thank you’ to one of the pillars of the peace process, a man voted Ireland’s Greatest by the people of the country in an RTE poll.

A special function is taking place this Saturday evening at the Caiseal Mara Hotel in Moville.

A dinner will be followed by musical tributes including one from Burt singer Brian Sheerin.

Long-time friend John Putt is the man behind the tribute.

“He may be a Derry man but John Hume has lived here for a long time,” said Mr Putt.

“This is an event for local people to pay tribute to Mr Hume for all he has done for this country.”

And he suggested the people of Derry should do the same – and name the Foyle Bridge after the former MP for the city.