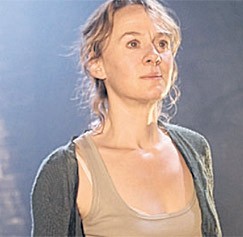 TOP ACTRESS NIAMH Cusack has told how her favourite childhood memories centre around holidays in Donegal.

The top Irish actress and star of stage and screen says she remembers her trips to Donegal from her home in Dublin in the 1960s very fondly.

The London-based star, 51, said: “We used to go to Donegal with a family called the Gaffneys, who had eight girls.

“We would play rounders on the beach in the rain and swim in the freezing Atlantic water.

“The mother was a great baker; we used to come back and she’d have made these flapjacks – we called them “chicken food”.

“They were rationed rigorously and there were always fights over them. The father would do quizzes around the dinner table. To be around a huge, bustling family was great.”

However the actress, when asked about her favourite destination in these islands, chose the Cotswolds in England.

And her favourite destination abroad….Paris!