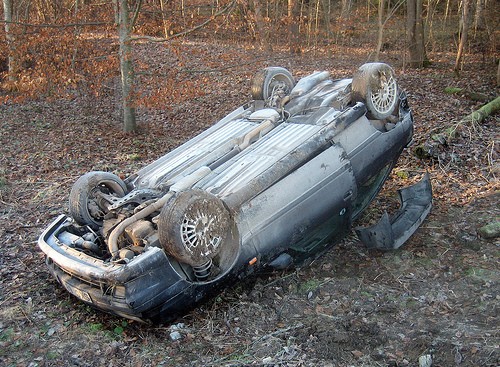 DEATH DRIVERS have been behind a ‘week of hell’ in Letterkenny.

At least six cars have been written off in the town in the past few days.

Boy racers in stolen or cheap cars are involved in early morning races in and around several estates, but also on rural roads around the town.

In one incident on Cullion Road, a car ended up on its roof.

Garda sources say they are aware of the various incidents.

One source told donegaldaily: “This craze appears to be out of control. The kids in these cars don’t seem to care about the consequences of their actions.

“They will kill themselves or someone else. The past week has been crazy, a week of hell.”

Some Garda officers fear the death drivers will kill again.

Garda Robbie McCallion died in Beaumont Hospital in Dublin on April 7, 2009 a few days after he was struck by a car while on duty in Letterkenny.

The driver of the stolen car, Jamie McGrenaghan (19) from Kerrykeel, was charged with his manslaughter but after a three day trial, the jury took two hours to find him not guilty.

He pleaded guilty to dangerous driving causing the death of 29-year-old Garda McCallion and also stealing a car. Following the not guilty verdict, Mr McGrenaghan pleaded guilty to his involvement in a number of burglaries between February 26 and 27.