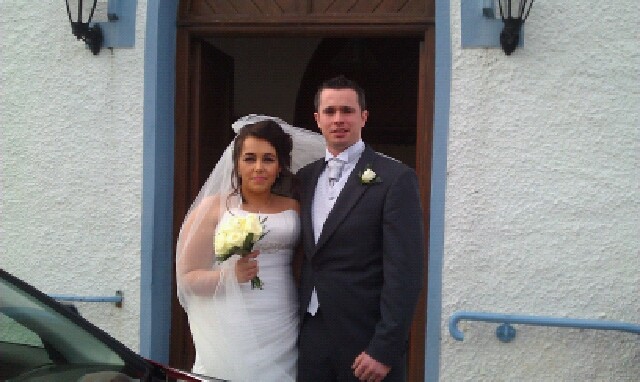 SUN SHINES FOR HAPPY COUPLE WHOSE WEDDING WAS HIT BY WINTER SNOW!

THE last time Donegal couple Anthony Black and Marion Gibbons tried to get married, the whole thing had to be called off.

On New Year’s Day there was two feet of snow and temperatures of -16C!

So when the couple finally got to say ‘I do’ in Fanad today, they were sweltering in temperatures of 20C – a full 36C warmer!

Marion is the President of the Students Union at LYIT where Anthony is a sports student.

The wedding ceremony is being followed by a reception at the Silver Tassie Hotel who were happy to re-arrange the day for the couple.

The couple won’t have time to catch their breaths though – they’re emigrating to Canada with their children in eight weeks time.

The groom’s brother Michael said: “It has been a great day; instead of Arctic conditions, it feels more like Malaga today.

“I’m looking forward to seeing their faces when this appears on donegaldaily.com later!”

Have a great day folks!

SUN SHINES FOR HAPPY COUPLE WHOSE WEDDING WAS HIT BY WINTER SNOW! was last modified: April 9th, 2011 by admin