DONEGAL GETS ANOTHER CHANCE TO SPIN THE WINNING STREAK WHEEL 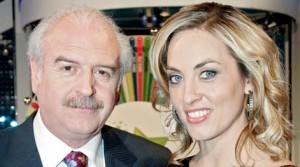 Patrick P McGee from Derrybeg will appear with Marty Whelan and Kathryn Thomas on next Saturday night’s show with the chance of winning a cool €500,000.

And he’ll be hoping to follow in the footsteps of other Donegal people who have appeared on the show in recent weeks.

Smiling Stanley Grier from Ramelton was just one click away from scooping €500,000 recently when he spun the big money wheel but still took home €100,000 plus a holiday.

And a week before that an Illies woman scooped €55k and a Kenyan safari holiday – after she too spun the big wheel!

Mother of two Angela Devlin was picked for the show after her husband’s mum Annie Devlin bought her the lucky scratchcard at Buncrana SuperValu.

The housewife won a cool €35,000 on the Big wheel, along with €20k from the previous rounds and a 5-star safari holiday in Kenya worth €5k.