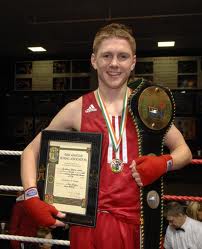 FINN Valley Boxing Club middleweight Jason Quigley is celebrating after landing gold at a top European tournament – and being named Best Boxer of the entire event.

In all Ireland won five gold medals from five finals to finish on top of the medals table at the 15-nation Gee Bee Multi-Nations tournament in Helsinki on Sunday.

Finn Valley BC Donegal middleweight Jason Quigley and St John Bosco BC Belfast flyweight Conlon – who both recorded victories over England – added the icing on the cake by scooping the Best Boxer and Best Technical Boxer of the tournament awards.

Egan, meanwhile, won his third Gee Bee gold medal on the trot with a 3-2 decision over Eemeli Katajisto of Finland in the light-heavyweight class.

Conlon got the gold rush underway with a convincing 11-5 decision over England’s Tony Stubbs and Quigley was superb in his 13-5 win over Stubb’s compatriot Anthony Ogogo.