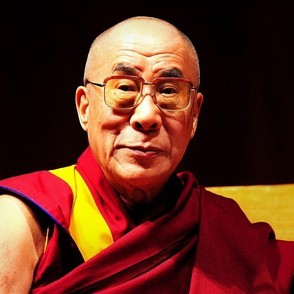 CHILDREN from Scoil Eoghan in Moville will meet the Dalai Lama in Dublin today – and are literally ‘thrilled to bits’.

The religious leader arrived in the capital last night and today the children from fifth class of the Inishowen school will perform for him at a major conference at the CityWest Hotel in the city.

Said teacher Rose Kelly: “The children put on a performance in a project we were doing in conjunction with the Family Resource Centre.

“Their performance was noticed and they were put in for this conference in Dublin and have been selected to perform at the opening.”

She added: “This is a major conference on social justice organised by Children in Crossfire and an organisation called AFRi and will be looking at social justice and injustice.

“The conference will be chaired by the Dalai Lama and the speakers will include Richard Moore and Mary Robinson.

“Afterwards the children will act as a guard of honour for the Dalai Lama and then get to meet him.

“The piece they did is called ‘Close your Eyes’ and it looked at social justice and inequalities.

“As part of it, the children had to research and get figures on the Gorta Mór (The Great Famine) and then look at how resources are used and indeed wasted.”

The Dalai Lama is in Ireland on the invitation of Mr Moore, blinded by a British Army plastic bullet in Derry more than 30 years ago. The two have become friends.