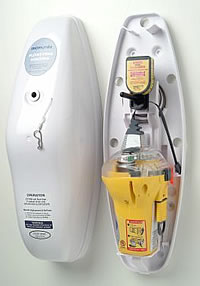 An automatic detection device costing just €250 which could save lives at sea is not compulsory for all boats, it has been revealed.

The Irish language newspaper Foinse reported yesterday that emergency position-indicating radio beacons or EPIRB’s are tracking transmitters which aid in the detection and location of boats and people in distress.

The device could help save lives and reduce the cost of marine rescue services by millions of euro per year.

However there is no legislation forcing small craft owners to use the devices.

Kevin Rahill, a safety education officer with the RNLI,  whose lifeboats launched more than a thousand times last year, told Foinse:  “The RNLI advise that people who go out on long distance journeys should  have an EPIRB on board. It is a very useful piece of equipment. If you are staying close to the shore VHF radio is probably enough but if you are going out of radio range you should have an EPIRB.”
.
There was an EPIRB device on board the boat of the Skerries fishermen, Ronan Browne (25) and David Gilsenan (41) who went missing on the 1st of April after leaving Skerries harbour in their 17ft open-top vessel, Lady Linda.

However the device was an older manual version which has to be set by hand – and not an automatic version.