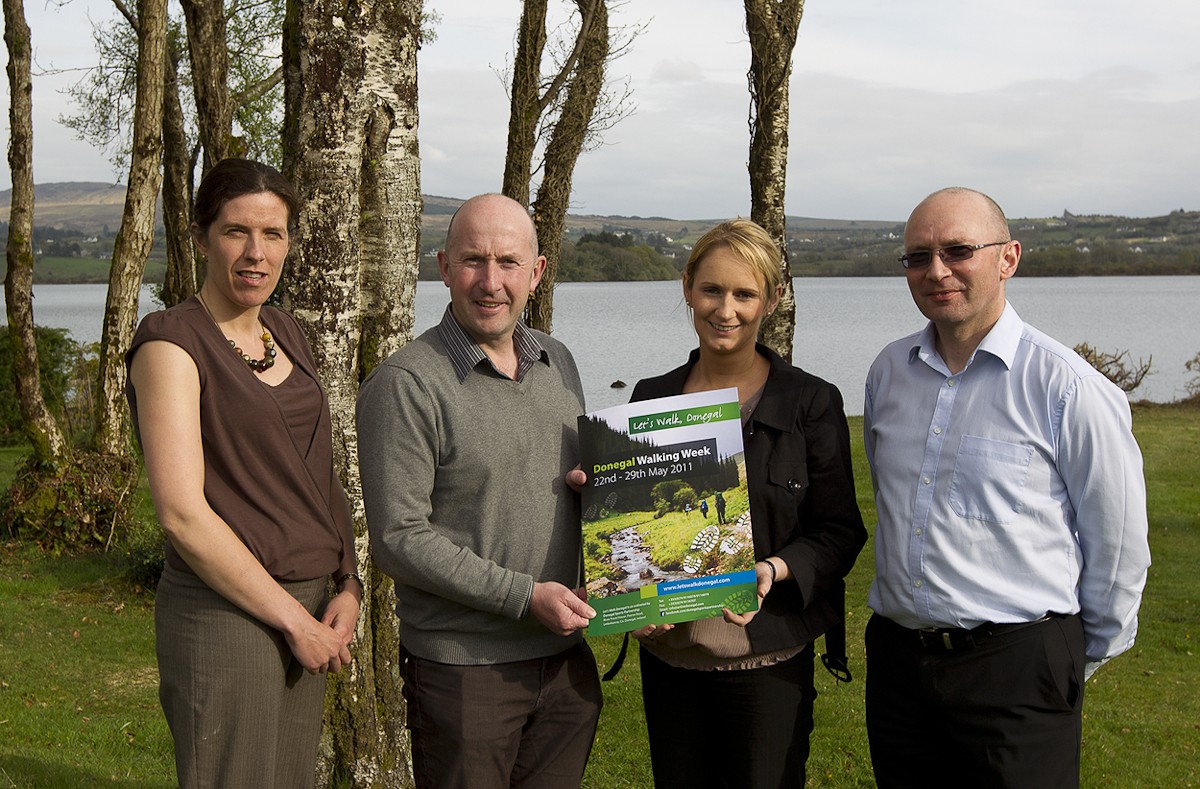 The annual Donegal Walking Week was officially launched by County Donegal Mayor Cllr Cora Harvey at Harvey’s Point near Donegal Town, the annual event which is in its fourth year is organised to promote walking throughout County Donegal and will take place between the 22nd and 29th May.

This year the event organisers hope to have 50 walk related activities in every part of the county to promote walking for everyone k off with the Mayor’s own walk on Saturday evening the 21st at the Ards Friary near Creeslough, with 200 acres of grounds and many beaches, Ards hosts some spectacular views perfect for a Saturday evening ramble.

Walking Week will also include walks on Sliabh Liag peninsula renowned world wide for its spectacular walks and its rugged scenery, the Sliabh Liag Walkers Club have organised two quite strenuous walks on the Pilgrims Path and from Bunglas to Glencolmcille.

Horn Head near Dunfanaghy is also on this year’s calendar of events with a 4k and a 10k walk taking in areas such as Breaghy head and Tramore beach. Inishowen will also be represented with walks planned around the peninsula in areas such as Inishowen Head, Inch Wildfowl Reserve and Moville.

Stager Mountain and the Poisoned Glen in Dunlewey, Aranmore Island, Creevy in Ballyshannon and Dungloe  are also on this years programme and will give local’s and visitors a real opportunity to see a whole new Donegal.

Mayor Cora Harvey said she was delighted to be associated with Donegal Walking Week and urged everyone in Donegal to make the effort to get out for a walk during the Lets Walk Donegal event, she said that getting in a 20 minute walk every day can add immensely to a persons health not alone in the physical aspects but also mentally and socially. It is also a relatively cheap physical activity which in these trying economic times should be welcomed.

The Mayor also encouraged communities to use walking as a tool to attract visitors to their respective areas, Donegal has some of the most spectacular scenery in Europe with many areas that are quite breathtaking, local walking initiatives can also have an economic impact and should be encouraged.

Chairman of Donegal Sports Partnership Mr Eamon Harvey wished the event well and hoped that everyone would have an enjoyable week exploring the many fine sites available to walkers in the county, he said that we cannot underestimate the benefits of physical activity including walking in tackling obesity, lowering blood pressure and in creating a social outlet for friends to meet.

Myles Sweeney Coordinator of Donegal Sports Partnership thanked all the agencies for their continued support for what is a growing event with 50 walk related events targeted all across the county. He paid special tribute to all the community organisations, walking clubs and walking leaders for their assistance in organising events which are mainly free of charge and events which cater for the novice to the more advanced walker.