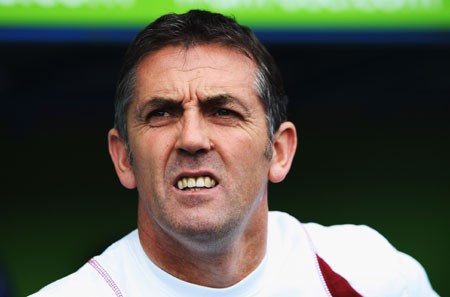 OWEN COYLE AT WEMBLEY: I’M DRIVEN BY VALUES OF MY DONEGAL DAD

WHEN Owen Coyle leads his team onto the hallowed turf at Wembley this weekend, he will remember his late father – and wave to his mum in the crowd.

His Bolton Wanderers side is 90 minutes away from an FA Cup Final.

All that stands between his Lancashire side and another day out at Wembley against Manchester City in the final is a resurgent Stoke City with its own Donegal connection – perhaps the world’s greatest long throw specialist Rory Delap.

Whoever wins, there will be a Donegal connection in this year’s final.

But this Sunday at Wembley, Owen Coyle will recall his late Gaoth Dobhair dad, also called Owen, and what he did to get him to where he is today.

“What my father did as a 15-year-old is incredible,” says Coyle about his dad’s move to Glasgow to find work at such a young age.

“To make that sacrifice for your family, as many boys did then, it’s difficult to grasp now. He instilled in us to never be afraid of hard work and maximise what assets you have.”

It was advice he took – and passes on to his players at Bolton today.

“I was 10 stone as a striker, which was unheard of, so I had little option but to work at it. I tell the lads here you’ll never know what you can achieve unless you push yourselves,” said Coyle.

“Nobody in life is going to hand you anything. You have to go and earn it. Even today, the points or trophies that give you the greatest satisfaction are the ones people say: ‘you deserved them because you earned them’.

Coyle maintains these same working-class values can keep footballers in touch with the common fan.

“It’s important the fans buy into who you are,” he said.

“Footballers are put on pedestals. Yes they have a privileged lifestyle but they must realise that doesn’t make them better than anyone else. It should be no different to any real job.”

Coyle forged his football beliefs on the cluttered ash pitches of the gritty Gorbals area of Glasgow – in an area known as Little Donegal.

“It could be 22-a-side or less if someone went home for a bit of jam and bread,” he said.

“There was a sense of community too. It was educational and not just in football terms. Things I learned on those pitches have never left me.”

Mum Frances, is 80 years old and still works in Glasgow’s Citizens Theatre. She will be at Wembley this weekend – and goes to all of Bolton’s home games.

“My mother is incredible. The fact she is still working says everything about her values,” added Owen.

OWEN COYLE AT WEMBLEY: I’M DRIVEN BY VALUES OF MY DONEGAL DAD was last modified: April 17th, 2011 by admin