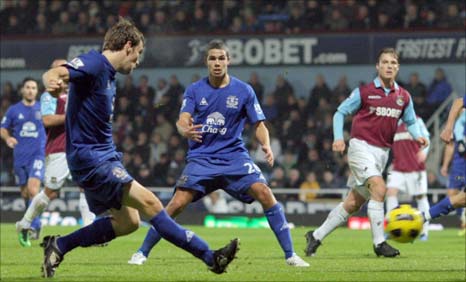 KILLYBEGS star Seamus Coleman helped Everton to yet another Premiership win – by coming off the bench and winning a crucial penalty.

Second half goals from Leon Osman and that late penalty from Leighton Baines helped the Merseysiders to three more points and move a point behind Liverpool.

After a deadlocked first half, Everton came out for the second half on fire and took the lead after 54 minutes – with the help of some luck.

After a short corner, Osman jinked past Rochina and fired a low shot that took a big deflection off the unfortunate Christopher Samba.

Everton went after a second goal – and it came in the 75th minute.

After coming off the bench in the 66th minute for the tiring Gueye, Seamus Coleman won the penalty for his side after a poorly timed tackle from Phil Jones brought the Donegal man down. Baines stepped up and made no mistake as he powered his effort past Robinson.